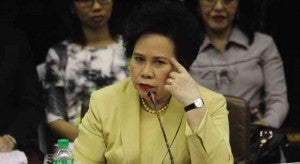 Santiago said silence on such a huge scandal as the misuse of billions of pesos in public funds meant a particular politician was willing to make friends with anybody—right or wrong, corrupt or honest—as long as the politician can get votes.

“That candidate is an opportunist.  He does not act out of conviction, but acts out of what is convenient for himself,” Santiago said in a speech on Friday at the Lyceum of the Philippines University in Batangas,

“Politicians who purposely refrain from participating in the national debate on the pork barrel scandal are politicians who are cowards, because they refuse to take a position for fear of incurring the anger of the guilty ones.  This kind of cowardice is anathema to leadership,” she added.

Santiago indicated that while the Senate blue ribbon committee hearings on the pork barrel scam were covered extensively by the media, especially television, certain politicians were conspicuous by their silence.

“Leadership is the courage to take risks in defense of a position that is both legal and moral. The politician who tries to become a wise guy by being friends with everybody—corrupt or not—is not a leader,” Santiago said.

“This is the test I want the people to apply, as the 2016 election approaches.  Apply the test of leadership among the candidates,” Santiago said.

“This sordid case of plunder in our political history is evidence that corruption is caused by a top-down process,” she added.

Santiago reiterated her position that all those who would be charged in court in connection with the scam should not be entrusted with the electorate’s votes.

“We should not reelect any senators or congressmen in 2016, if they are among those the Ombudsman will file criminal charges against for plunder or malversation of public funds in the Sandiganbayan,” Santiago said.

Sen. Jinggoy Estrada and Sen. Ramon Revilla Jr., two of the three senators charged before the Ombudsman in connection with the scam, are reportedly being considered by their respective political parties to run for higher office in 2016.

“Of course, every person enjoys a presumption of innocence…. but when the Ombudsman conducts the preliminary investigation, she goes over voluminous papers and other documents, as well as affidavits executed by eyewitnesses,” Santiago said.

‘Jinggoy’ glad to be Binay’s running mate; Vilma not interested