CITY OF SAN FERNANDO—Reports that detained real estate developer Delfin Lee would turn state witness were “highly illogical” and untrue, according to the lawyer of Lee. 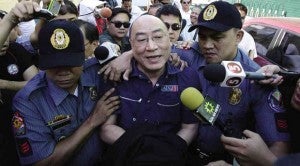 Willie Rivera, Lee’s counsel, said misinformation had led to speculation that his client was being wooed to turn state witness.

“Reports that he would be a state witness are highly illogical because there is no more [syndicated estafa] case,” Rivera told the Inquirer by telephone on Saturday.

Rivera was referring to the Nov. 7, 2013, ruling of the Court of Appeals (CA) Special 15th Division which dismissed the syndicated estafa charges filed by the government against Lee and his coaccused GARHC officer Christina Sahagun and Pag-Ibig Fund official Alex Alvarez.

A complaint for syndicated estafa requires five accused, so the CA ruling lowered the charges to simple estafa.

Rivera said it was lawyer Gilbert Repiso who announced that Lee was willing to testify for the state. Repiso had presented himself as Lee’s counsel.

“Attorney Repiso has no authority to say that. He is not part of DL’s [Delfin Lee’s] legal team… This is misinformation,” Rivera said, adding that it was also not clear who Lee would turn against.

Sen. Sergio Osmeña III has accused former Vice President Noli de Castro of being accountable for the Pag-Ibig Fund mess. De Castro was chair of the Pag-Ibig Fund when the agency approved the “Other Working Groups program,” which GARHC accessed to acquire loans on behalf of home buyers. Some of those loans were for P650,000 while others went as high as P830,000.

But in a Senate hearing, De Castro said his role was limited to policy.

“We have not and we will never negotiate for Lee to be a state witness,” Rivera said.

He said that he and lawyer Ronnie Giray will be filing a case for habeas corpus tomorrow (Monday) to establish that Lee’s arrest was illegal.

Lee went into hiding in May 2012 after Judge Amifaith Fider-Reyes of Regional Trial Court Branch 42 in Pampanga ordered his arrest as well as that of his four coaccused.

Justice Secretary Leila de Lima said the arrest warrant was valid because the Supreme Court had not yet acted on a petition filed by Pag-Ibig Fund officials objecting to the CA’s quashing of the warrant.

Lee is detained at the Central Luzon office of the National Bureau of Investigation (NBI) in this Pampanga capital.

His lawyers cited security concerns when they asked the court not to put him in the provincial jail, which is some 100 meters from the NBI regional office.

An Inquirer source, who asked not to be named, said that Repiso is a lawyer of Oriental Mindoro Gov. Alfonso Umali, who has been described as a friend of Lee’s business partner. Umali is treasurer of the Liberal Party.

Umali admitted in a television interview on Friday that he called Philippine National Police Director General Alan Purisima to inquire about Lee’s arrest.

He made the admission after Vice President Jejomar Binay revealed that an influential person had tried to intercede on Lee’s behalf.