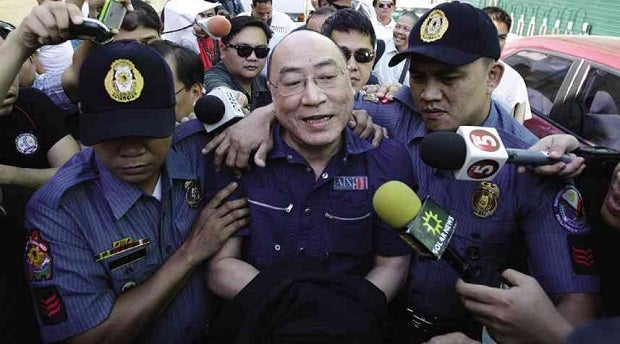 This was how Ferdinand de Guzman and 24 other complainants reacted to the news that fugitive housing developer Delfin Lee was arrested on Thursday night at a five-star hotel in Manila. Police invited Lee for questioning on Thursday night and brought him to a Pampanga court early Friday.

“We hope they will be punished for the wrong they did to us,” said De Guzman, 45, who sells boned bangus and tuna.

Lee, the president of Globe Asiatique Realty Holdings Corp., had gone into hiding after a Pampanga judge ordered him and four others arrested for syndicated estafa in May 2012.

De Guzman and other clients of Lee sued the developer for the allegedly fraudulent use of almost P7 billion in housing loans that were issued beginning in 2008 by the Home Development Mutual Fund (Pag-Ibig Fund). The cases involve more than 10,000 housing loans.

De Guzman said he and the other complainants all bought homes in Lee’s Xevera Homes here.

After having paid P401,000 since 2009 for a Xevera property, De Guzman learned that the unit he had bought was not registered in his name.

“It’s in the name of a ghost buyer,” he said, voicing essentially the same problem of the other complainants who had bought property in Lee’s development.

Lee’s alleged scam involved using ghost Pag-Ibig Fund members and the double sale of housing units to obtain P7 billion from the state housing agency for housing development undertaken by his Globe Asitatique in Bacolor and Mabalacat, Pampanga, between 2008 and 2011.

De Guzman claimed that a Globe Asiatique employee had offered him and other complainants P1.2 million each to “withdraw the case.”

“I wanted to accept it but accepting it would continue the scam. More home buyers will be victimized if Lee and his cohorts go unpunished,” he said.

Police arrested Lee and turned him over to Judge Edgar Chua of the Regional Trial Court Branch 47 after 9 a.m. on Friday.

He is being detained on the strength of the arrest warrants issued by Judge Amifaith Fider-Reyes of RTC Branch 42. But because Reyes was handling court duties in Makati on Friday, Lee was turned over to Chua’s court.

Threats to his life

Instead of putting Lee in the Pampanga provincial jail in San Fernando, Chua committed the multimillionaire developer to the National Bureau of Investigation (NBI) detention center in Central Luzon after Lee’s lawyers claimed their client needed protection because of threats to his life. The Pampanga jail is about 100 meters from the NBI regional office.

Willie Rivera and Ronnie Garay, Lee’s lawyers, also questioned the arrest, claiming that the Court of Appeals had cleared Lee’s coaccused in the syndicated estafa case, which, in effect, reduced the case against the developer into simple estafa.

The appellate court granted Lee’s petition to stop the hearing of the syndicated estafa case before the Pampanga RTC and quash the arrest warrant.

But Pag-Ibig Fund and the Department of Justice appealed the appellate court ruling to the Supreme Court.

“They should respect that the arrest warrant has been quashed,” Rivera said.

She said that as the Office of the Solicitor General had filed a “timely” appeal against the Court of Appeals’ November 2013 ruling, the latter’s decision was “not yet final and executory.”

According to De Lima, she had been told by the prosecutors handling the case that the RTC judge (Chua) “agreed with our position that the arrest warrant is still subsisting.”

Lee thanked the police for what he said was the “professional treatment” accorded him.

At the NBI regional office, Lee’s blood pressure rose to 140. The NBI brought in a doctor to examine him but the doctor did not recommend that he be taken to a hospital.

The detention center, which can hold as many as 20 people standing shoulder to shoulder, holds only Lee and another detainee, who is being held for human trafficking.

Lawyer Jojo Yap, the NBI Central Luzon director, said his agency had been tasked to secure Lee, take him to court during hearings, and feed him.

Lee and family members who accompanied him to Pampanga, refused interviews outside the court or at the NBI.

But as he was being taken to Chua’s office, the businessman could be heard muttering: “Hindi totoo, hindi totoo (It’s not true, it’s not true).”

Authorities did not say if anyone received the P2-million reward that President Benigno Aquino III offered for information leading to the arrest of Lee.

Senior Supt. Conrado Capa of Task Force Tugis, which carried out the arrest, said an informant had tipped them off to Lee’s whereabouts.

Lee was arrested at the lobby of the Hyatt Hotel and Casino in Ermita, Manila, at 6:45 p.m. on Thursday.

The businessman had been under constant surveillance since last year, Capa said.

“This afternoon, he was spotted aboard an SUV and he was tailed up to the hotel where he was arrested at the lobby,” Capa told reporters.

Senior Supt. Joel Coronel of the Criminal Investigation and Detection Group (CIDG) said the case against Lee was nonbailable.

Coronel said the arrest warrant was still valid, despite the Court of Appeals ruling absolving Lee of the crime of syndicated estafa, because the case had been elevated to the Supreme Court.

“The Court of Appeals has already observed judicial courtesy. The warrant is valid and subsisting,” Coronel said.

But Gilbert Ripiso, one of Lee’s lawyers, argued that the appellate court had already issued an order quashing the arrest warrant.

Ripiso also stressed that Lee was not “arrested but invited.”

“He was not arrested at the Hyatt Hotel, he was invited to go to Camp Crame. He was not handcuffed. When he got here, he was told that he would undergo booking procedures,” the lawyer said.

He said the arresting police team only had an alias warrant of arrest.

“I told him, if they will only invite you to clarify things, then go, you are not being arrested,” Ripiso said.

Not final and executory

But deputy presidential spokesperson Abigail Valte said the appellate court ruling was not yet “final and executory since we filed an appeal to the decision of the Court of Appeals.”

“And proof positive of the fact that it did not become final and executory are two things: One, the warrant of arrest was not recalled, which is normally the case if quashing has been made final. It wasn’t recalled, and second, the hold-departure order against Mr. Delfin Lee was not lifted,” said Valte, who is a lawyer.

Communications Secretary Herminio Coloma called on Lee to “face the music” instead of questioning the validity of his arrest.

His arrest provides Lee with a clear opportunity to answer the serious charges against him, Coloma said in a text message.

“(Law enforcement) efforts that used to be concentrated on finding this particular person (Lee) can now be diverted to other persons that need to be tracked down,” as well, Valte said.

Vice President Jejomar Binay on Friday said that “certain influential people” had attempted to stop the  police from taking Lee into custody.

“There was a long discussion at the [PNP Camp Crame] headquarters about his arrest. It’s good that the right thing prevailed,” he said.

“They (unnamed influential people) were trying to influence… What was a surprise to me was that they went [as far as] going to the police headquarters last night, trying to make the police release him on the allegation that the CA had made a favorable decision,” said Binay who heads the government’s various housing agencies.

He agreed with the government’s position that the arrest warrant issued by Reyes was still valid while the Supreme Court has yet to decide the government’s petition for a review of the appellate court’s ruling favoring Lee.

“He cannot be released. What the court has to do now is to issue a commitment order. That’s ministerial … Delfin Lee must be brought to the provincial jail,” said Binay, who is a lawyer. With reports from Julie M. Aurelio, Michael Lim Ubac, Tarra Quismundo and Jerome Aning