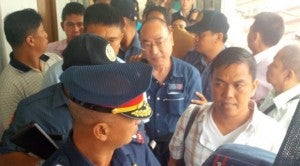 The discovery of the identity of Delfin Lee’s mistress and his penchant for luxurious rides did him in.

The fugitive real-estate magnate had been going around the metropolis in style despite the order for his arrest issued by the Pampanga Regional Trial Court, according to a police official directly involved in tracking down Lee.

Hunted since May 2012, the owner of GlobeAsiatique Realty Holdings Corp. was arrested at a ritzy hotel casino in Ermita, Manila, on Thursday night.

His biggest mistake? The high-end vehicles he was using were all registered under the name of his 41-year-old live-in partner with whom he has three children, the source said.

“We really started from scratch in our task to locate and arrest him,” said the police official, who agreed to talk with the Inquirer on condition of anonymity for lack of authority to speak on the matter.

“We got a big break when we were able to determine the identity of Mr. Lee’s live-in partner sometime in December,” he said.

“From there, we searched where the woman was staying and what vehicles she was using. We found out from the records of the LTO (Land Transportation Office) that she actually owned several high-end vehicles,” the official said.

“His arrest was the result of months of careful investigative research and intelligence gathering. We used several informants to find Mr. Lee,” the source said.

“The PNP chief had also been badgering us to produce good results since Task Force Tugis was created in August last year,” he added.

The police official said the task force received information that Lee was hiding in Metro Manila, riding in different luxury vehicles owned by his mistress in getting around the metropolis.

The source asked the Inquirer not to name the woman, saying she was not in anyway involved in the syndicated estafa case filed against Lee.

He said the woman owned a Dodge Durango, a Porsche Cayenne, a Ford Expedition, a Toyota Land Cruiser and a Mitsubishi Adventure.

Lee, on the other hand, owned a Porsche Panamera, he added.

“But he seldom used the Panamera because he knew the authorities were already hot on his trail,” the PNP official said.

“Mr. Lee was using his live-in partner’s vehicles alternately to avoid suspicion. The windows of the vehicles had dark tints, which made it difficult for us to determine if he was really inside the vehicle every time we did surveillance operations,” he said.

Since he went into hiding, Lee stayed most of the time in an apartment at the ritzy Governor’s Place residential block on Shaw Boulevard, Mandaluyong City, with his mistress and their children, the official said.

He said Lee was also seen frequenting a house in Parkway Village in Quezon City and an apartment at the GA Tower residential building on Epifanio de los Santos Avenue in Mandaluyong City that Lee owned.

Before he was arrested in the lobby of Hyatt Regency Hotel and Casino, the PNP official said, Lee left Governor’s Place at around 1 p.m. in his mistress’ Porsche Cayenne with license plate No. XRE-761.

When the vehicle got stuck in traffic on its way to the hotel, the official said, a motorcycle-riding member of the arresting team managed to get close to it and saw a man inside “who looked like Delfin Lee.”

“Luckily, the window tint of the Cayenne was not that dark. Our agent was able to make a positive identification of the subject,” the police official said.

He said he and his team decided not to enter the hotel and just place a stakeout in the area to avoid calling the attention of Lee’s driver and their other companions.

The official said he and his team were not sure exactly where in the hotel Lee was, but were told by an informant that the fugitive was in a meeting with his lawyer and his business partners in a private room.

After waiting for almost four hours, he said, Lee and his group emerged at the lobby of the hotel. It was 6:45 p.m. Plainclothes policemen walked up to Lee and arrested him.

The police official vehemently denied the claim of Lee’s lawyer that the arrest was illegal, saying the arresting team informed the fugitive businessman why he was being arrested.

“Mr. Lee was immediately handcuffed. We read him his rights. We also explained to his lawyer that the arrest warrant against his client was still valid and in effect,” he said.

Lee was then taken to Camp Crame to undergo medical checkup. Police also took his mug shots and fingerprints for documentation.

Asked if Lee had become too lax since the controversy over the P7-billion housing scam has been buried by the pork barrel scam, the source said: “I don’t think so. He was really very unpredictable. He was like that since the first day we tried to track him down.”

“We were just lucky that all our hard work paid off. This victory of the rule of law is a joint effort of several police units and not just Task Force Tugis alone,” he said.