Obama vs Putin: Getting personal over Crimea 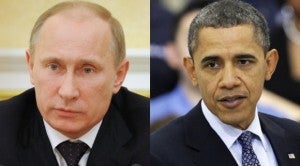 By upping the ante with his threat to isolate Russia with sanctions over Crimea, US President Barack Obama risks setting off a cycle of confrontation with Russian President Vladimir Putin.

And despite Obama’s reluctance to play Cold War-style chess with the Russian president, a degeneration into a new great power rivalry cannot be ruled out.

Since Russia’s move into Ukraine, Obama has steadily upped pressure, while offering Putin a diplomatic “off ramp” to defuse the crisis.

But the belief in Washington is that only Putin has the power to dictate outcomes—introducing a personal dimension into the crisis.

That recognition underpinned two bluntly spoken calls between Obama and Putin this week.

The US plan would see international observers monitor the welfare of ethnic Russians in Ukraine, Moscow’s troops withdraw to Crimean bases and Ukrainian elections in May.

But the Russian troop buildup in Crimea and a pending referendum among the peninsula’s mainly Russian-speaking citizens on joining Russia seems to be outpacing US diplomacy.

How bad will it get?

The question now is whether the worst East-West crisis since the Cold War will chill the entire relationship between the world’s top two nuclear powers.

For instance, can Washington insulate high priority areas of cooperation—like Iran nuclear talks and its transit route out of Afghanistan—from the dispute? Or will the dynamics of the crisis and the pressure on both Obama and Putin to appear strong create their own destructive dynamic?

Lee Feinstein, a former US ambassador to Poland and a campaign adviser to both Obama and Hillary Clinton, said options were already narrowing.

“It depends on the trajectory that Putin takes,” said Feinstein, a senior fellow at  German Marshall Fund.

“Frankly, if the intervention in Crimea continues, that is going to make it much more difficult on a whole range of issues,” Feinstein said.

Obama this week appeared on camera to personally highlight visa bans on some Russian officials and a structure for sanctions on some entities and individuals.

If Crimea is taken from Ukraine and taken by Russia, Obama would have little choice, along with European partners, to make good on his threats, risking Russian retaliation.

The US president’s personal credibility, already derided by political foes who slam him as a “feckless” statesman, is now clearly on the line.

Not his preferred legacy

A new great power rivalry is not Obama’s choice. He came to office determined to “reset” relations with Russia.

Although the policy yielded a new nuclear arms reduction deal, helped him win a Nobel Prize and was instrumental in clamping tight sanctions on Iran, it ran out of steam before he won reelection.

But by keeping diplomatic options open through Kerry and by coaxing Putin, Obama hopes to forestall a prolonged confrontation.

Michael McFaul, Obama’s just departed ambassador to Moscow, believes Russia’s cooperation on the Iran nuclear talks, for example, can endure “not because Putin is doing us any favors but because he sees [it] in Russia’s national interest.”

In that sense, the idea behind the reset—that while Russia and the United States are not friends they can cooperate where it makes sense—could survive.

But with Putin often seeming to define his bid to restore Russia’s pride and influence by thwarting US foreign policy—in Syria for instance—the spirit of the reset is long dead.

Soil was piled on its grave with Russia’s offer of asylum to fugitive US leaker Edward Snowden.

And Obama penned its obituary by snubbing Putin last year by judging their agenda too threadbare to justify a planned Moscow summit.

“Already, well before this crisis there was not a ambitious program coming out of Washington in terms of some great set of initiatives,” McFaul said.

“Maybe the president thinks the Cold War is over, but Vladimir Putin doesn’t,” said Republican Sen. John McCain on MSNBC.

But Obama has long dispensed with illusions about Putin.

He sees Putin’s world view as framed by his apprenticeship in the KGB and nationalistic nostalgia for the Soviet Union.

He is also irritated by the perception that Putin “rescued” him after he blinked at striking Syria over its chemical weapons use.

Obama argues the now troubled deal to destroy the Assad regime’s chemical arsenal was his idea nurtured by painstaking diplomacy, not an opportunist pounce by Putin.

He has let his disdain for Putin slip out publicly, noting the Russian likes to slouch in photo ops.

“My sense is that’s part of his shtick back home politically as wanting to look like the tough guy,” Obama told NBC.

Charles Kupchan of the Council on Foreign Relations said Obama changed course after observing Putin’s strategy on Snowden and Syria.

“I think Obama basically said, ‘Listen, I can’t continue down this path. It’s time to recalibrate our relationship with Russia.’”

“It is hard to imagine any of this getting back on track unless there is a resolution to the present crisis,” Feinstein said.

Meanwhile, in a phone call with German Chancellor Angela Merkel on Friday, Obama hailed the “unified position” of the European Union and the US against Russia’s incursion into Ukraine.

The leaders agreed that Russia must pull back its forces from Ukraine’s Crimea region, allow international observers and human rights monitors into Crimea to make sure the rights of ethnic Russians in Ukraine are protected, and support free and fair presidential elections.

They also discussed the need for Russia to form a contact group to hold direct talks between the two governments.

The White House says Obama telephoned Merkel on Friday after he arrived in Key Largo, Florida, for a weekend getaway with his family.

“The leaders reiterated their grave concern over Russia’s clear violation of international law through its military intervention in Ukraine,” the White House said.

The West has warned of sanctions against Moscow over its actions in Crimea, where pro-Kremlin gunmen blocked a foreign observer mission aimed at defusing tensions in the semiautonomous peninsula.