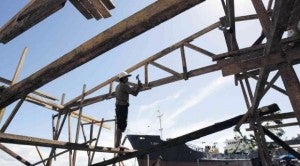 WHAT BUNKHOUSE? A resident rebuilds his home in Barangay Anibong in Tacloban City almost a month after Supertyphoon “Yolanda” and its storm surge flattened communities in the Visayas and killed thousands of people even as a beached ship remains in the area. NIÑO JESUS ORBETA

ILOILO CITY—Survivors of Super Typhoon “Yolanda” have fallen prey to loan sharks and small lending businesses for the repair of their houses amid the delay in government assistance, according to urban poor groups on Panay island.

Kalipunan ng Damayang Mahihirap (Kadamay) Panay-Guimaras said the delay in government assistance had worsened the plight of the victims, most of whom had also lost their means of livelihood.

“It has been four months after Yolanda. Where is the P30,000 for destroyed houses and P10,000 for damaged houses promised by P-Noy (President Aquino) and [Interior Secretary] Mar Roxas?” said Junard Francisco, secretary general of Kadamay-Capiz, an urban poor group on the island.

The supertyphoon, which packed winds reaching 300 kilometers per hour, destroyed 241,740 houses and damaged 256,356 others in Western Visayas, according to a Dec. 12, 2013, report of the Office of Civil Defense.

It also destroyed wide areas of farmland and at least 9,744 fishing boats in the region.

The government had assured the victims that those whose houses and livelihood were destroyed or damaged would be given assistance as part of a comprehensive rehabilitation plan.

Ruciebelle Galila, a member of the women’s group Gabriela and a typhoon victim in San Dionisio town in Iloilo province, said many houses that were destroyed and damaged by Yolanda had not been repaired.

“We have received food assistance from the Department of Social Welfare and Development and the local government, but most of the help have come from nongovernment organizations and private groups,” she said.

Kim-Sin Tugma, chair of the Aklan chapter of Kadamay, said many victims who lost their homes were forced to turn to money lenders despite high interest rates payable up to three months.

“We have no choice because we cannot just leave our houses in shambles while waiting for the promised assistance,” he said.