DAVAO CITY—On its website, Missouri-based Askinosie Chocolates features an enticing picture of Davao-made “tableya.” In 2009, it was a photo of a Philippine dark chocolate bar, 77-percent made from Davao cocoa.

“Dry, like a full-bodied well-aged red wine,” Shawn Askinosie, founder of the world-famous Zingerman’s Deli, was quoted as describing the Davao chocolate, which came from the first high-quality fermented cacao beans exported by Puentespina Farms.

“It was the first ever cacao bean export in the country after several years,” said Charito Puentespina, a chocolate maker from Davao City’s Malagos District and a former orchid grower, as she recalled how she broke into the export market in 2009.

It was Mars Chocolates that helped her tie up with Askinosie. “I was able to ship 8 tons in a 20-foot van, and so far, I never had any refusal,” Puentespina said.

Today, Davao’s chocolate makers are striving to make the place known for its best-tasting chocolates and not just for bananas.

The market for cacao is so promising that Peace and Equity Foundation (PEF), which has the country’s largest endowment fund of P2 billion, picked cacao among the commodities with high potentials of uplifting the living standards of farmers and depressed communities.

Industry estimates pegged the domestic demand for cacao at 40,000 metric tons per year and total production of only 10,000 MT. This means that the Philippines is importing 30,000 MT for its cacao needs. 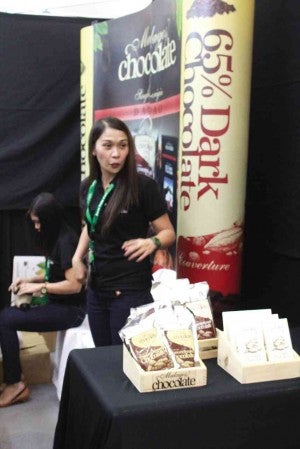 At the prevailing market price of $3,000 per ton of cacao, one could easily translate this unmet demand to a P4-billion untapped market for cacao growers, industry sources said.

“Why would we give that market away to Indonesia and Vietnam instead of getting  hold of it ourselves?” asked Pacita Juan, one of the PEF board members, during a Good News Kapihan forum last month at a hotel in Davao City.

With its endowment fund, the foundation plans to help out social entrepreneurs going into cacao and four other commodities listed among its priorities—coffee, coconuts, cane sugar and “climate-smart” commodities, which include rice, camote (sweet potato) and other root crops.

“In 2011, we shifted vision to help build sustainable communities, or communities that don’t just rely on help but make use of it to roll into enterprises that can help many people,” Juan said. “Although we have helped lots of people through the loans we extended in the past, we have changed direction to create more sustainable households by funding projects that can help the communities.”

Roberto Calingo, PEF executive director, said the project was in line with the government’s thrust for inclusive growth.

“We realized that the number of employed does not match the rosy economic picture that our economy is painting,” he said. “By supporting social entrepreneurs, we can bring about changes in the communities because what they’re making can spread the economic benefits. Assisting social enterprises will open up support to entrepreneurs who have very strong links with the communities, helping a lot of households,” he said.

Dante Muyco of Chokolate de San Isidro said the world  market for gourmet chocolates was so huge that it appeared almost unlimited. Even if the country met the challenge to plant 100,000 cacao trees by 2020, growers would serve only a limited portion of the market, which was growing about that much each year, he said.

“There are so many orders that keep coming in; we can hardly supply them, even with the many new entrepreneurs coming in,” Muyco said.

Puentespina stressed the need to focus on and maintain quality as a requisite toward commanding a higher price for Davao chocolates in the market. “We should be able to grow the quality beans required in the market to command a good price for our products,” she said.

“Selling low quality beans will push us back to history,” she said, recalling the low prices that Davao cacao beans used to fetch in the market.

Juan saw the need for growers and exporters to constantly promote their products and to zealously guard against attempts to associate these with cheap, low quality ones.

Value-adding of chocolates and tableya products also tended to create a stir in the market, giving the impression that the Philippines was also a “chocolate country,” Muyco said.

Cacao producers agreed that even with a huge unmet demand for chocolates in the local market, they still had to go into export to promote the single-origin Davao chocolates.

“The chocolate-making market is out there and it’s not really here,” Puentespina said. “At the same time, we want to tell the market out there that we exist,” she said.

“Among cacao producers, our passion is one big strength we should be holding on to,” said Josephine Ramos, coauthor of the book, “Cacao Bean to Bar.”

“Not only attached to our culture and cacao tradition, bean exports also reintroduce the country to the world’s cacao map,” Ramos said.