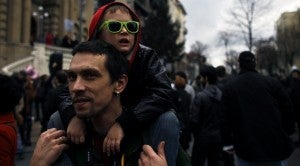 A man carries a boy on his shoulders during a protest in front of the Nikola Tesla Museum in Belgrade, Serbia, Saturday, March 8, 2014. Several hundred people are joining the dispute between the Serbian Orthodox Church and Serbia’s nationalist authorities because of a bid to move the remains of visionary scientist Nikola Tesla from the Tesla Museum to a church in Belgrade. Famed Serbian scientific pioneer in electricity, radio and x-rays, died in 1943. AP

BELGRADE, Serbia — Hundreds of Serbs rallied Saturday against plans by the Serbian Orthodox Church and nationalist leaders to move the ashes of scientist and engineer Nikola Tesla from his museum in Belgrade to the country’s biggest church.

Hefting banners that read “Leave Tesla alone!” the protesters blocked traffic in front of the museum, where the urn bearing Tesla’s remains has been on display for six decades. The protesters, among them many scientists, want his ashes to stay put.

“Tesla is not a saint to be buried in a church. He was a scientist,” said pensioner Boro Sikimic.

“Tesla does not belong only to us, he belongs to the entire world,” said Ana Jovanovic, an art historian.

Tesla, an ethnic Serb born in Croatia, was a pioneer in electricity, wireless communication, radio and X-ray technology in rivalry with Thomas Edison. Tesla died in New York in 1943.

Serbia and Croatia have sought to claim Tesla as their own, although the scientist spent most of his life in the United States. In line with Tesla’s wishes, his personal belongings, documents and urn were transferred from New York to Belgrade in 1951 for housing in a new museum honoring his life’s work.

Church and nationalist authorities want Tesla’s ashes moved to the St. Sava Temple in Belgrade and interred, not kept on display. They have insisted the remains should be properly buried with national honors.

Organizers said during Saturday’s protest they would challenge in court any attempt to move the urn.

“We have a message for the politicians: Be careful what you are doing!” physicist Milovan Suvakov told the crowd.

How electricity helps heal the body