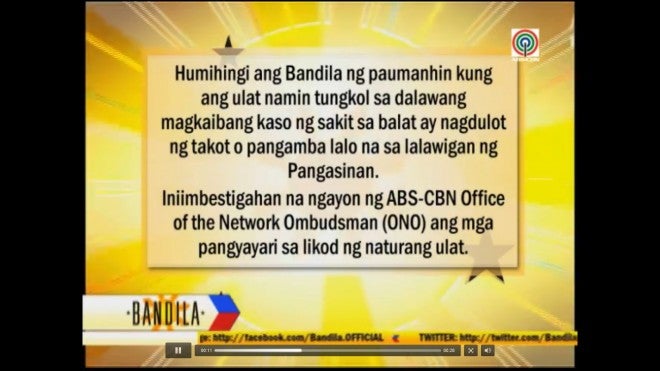 MANILA, Philippines – After the brouhaha that a late-night news program caused in its flesh-eating disease story, its television network officially apologized Thursday evening.

In a 30-second segment of the news program Bandila, anchor Julius Babao read the statement of apology.

“Bandila apologizes that their report about the two separate cases of a skin-disease caused a mass panic especially in Pangasinan,” the statement said.

Babao added that the ABS-CBN Office of the Network Ombudsman is investigating what happened.

“The ABS-CBN assures that there would be actions taken according to the results of the investigation of the ONO,” Babao said.

INQUIRER.net was the first to report that the Bandila story, which was originally planned as a two-part special, was a hoax after quoting health officials in Pangasinan. The officials said one of the two cases cited in the Bandila report was actually caused by leprosy and the second one a case of psoriasis.

In the initial report, reporter Jasmin Romero, clad in a scrub suit, talked to a certain “Claire” who had the supposed disease but did not disclose it as a known sickness or symptom.

To increase the hype, the report also used a hashtag, #MisteryosongSakitSaBandila, which blog-site Spinbusters turned into #PrayforBandila.