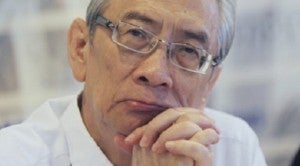 MANILA, Philippines—As the country observed the 28th anniversary of the 1986 Edsa People Power Revolution, a former head of the Catholic Bishop’s Conference of the Philippines said Tuesday said the country was still under a “virtual dictatorship,” with the government using money to get what it wants.

Archbishop Emeritus Oscar Cruz cited the passage of the reproductive health law and the removal by impeachment of former Chief Justice Renato Corona to explain his point.

At a church forum in Intramuros, Cruz claimed that in both instances money changed hands to ensure the outcome desired by the Aquino administration.

“It is a virtual dictatorship… meaning to say, the executive has the legislative and the judiciary branches under its command,” said the prelate, lamenting that the three branches of government, among the symbols of democracy, appeared equal only “on paper.” “In reality, they’re not,” he said.

He referred to disclosures that the Aquino administration used funds from the so-called Disbursement Acceleration Program to sway Congress into impeaching Corona in 2012 as well as passing the family planning measure, which the Catholic Church has staunchly opposed.

“It should not be that way. The very fact that you are using money to influence this and that, that is already foul. I hope I am wrong but the reality is sad but it’s the truth. It’s money that runs the present government,” said the bishop, a consistently vocal critic of the Aquino administration.

But he was quick to add that the kind of dictatorship the country endured in the hands of Marcos was “much worse.”

Edsa: A journey through history, chaos