No PMA clique in AFP, says chief of staff 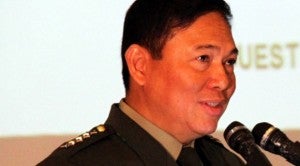 “That’s a misconception,” Bautista told the Inquirer in a text message. “The source of [one’s] commission is not among the criteria for [the] selection of officers to key positions.”

The source of commission refers to the school or training facility through which the officers passed. These include the PMA, which offers a four-year course; the Officer Candidate School (OCS), which offers a one-year course that requires applicants to have a baccalaureate degree; foreign service academies and reserve officer pools.

The 81-year-old former Air Force chief, one of the heroes of the Edsa I People Power revolution, lamented in a recent interview the “elitism of the PMA” in the armed forces. Sotelo, who is not a product of the PMA, pointed out that the AFP chief of staff and the service commanders of the Air Force, Navy and Army were all PMA graduates.

There has been palpable rivalry between PMA and OCS graduates over the past decades.

Bautista is a member of PMA Class ’81.

Sotelo was an Air Force colonel when he defected on Feb. 23, 1986, defying the orders of then President Ferdinand Marcos to disable the helicopters under the control of the military rebels led by then Defense Minister Juan Ponce Enrile and then Constabulary chief Lt. Gen. Fidel Ramos. His move was a turning point in the four-day revolt. Sotelo eventually rose to become chief of the Air Force.

But he agreed with Bautista that an officer’s service record rather than the school or source of one’s commission was the key qualification for a leadership position.

“The AFP—whatever source of commission you are, whether PMA, OCS local and abroad, foreign service academies, and reserve officers who underwent direct commission—provides a level-playing field that is performance-based,” Zagala said.

He described the AFP as a “tough organization” where officers and men should “prove themselves constantly.”

Critics of the AFP system, however, have also decried the inroads of politics and personal connections in the promotion process. Nikko Dizon