Only 27 bunkhouses completed in Tacloban 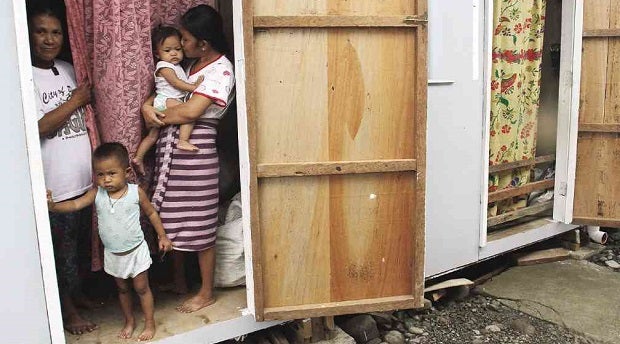 A WOMAN and her grandchildren transfer to a bunkhouse in the district of San Jose in Tacloban City after living for weeks in a tent. Many other evacuees are still in tents due to the delay in the construction of bunkhouses. RAFFY LERMA

(DPWH) has not completed the construction of 62 bunkhouses here.

Of the number, only 27 bunkhouses at Motocross Area along Barangay (village) Caibaan were completed and were partly occupied, said Virgie Idano, Department of Social Welfare and Development (DSWD)  Eastern Visayas assistant director for operations.

“The construction of the two other bunkhouses for Tacloban are not yet finished, and there are no power and water connections there,” Idano said. 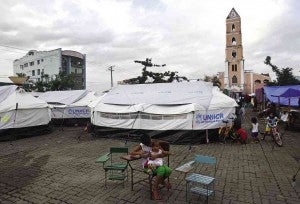 A TENT city rises near Sto. Niño Church in Tacloban City for hundreds of people who lost their homes when Supertyphoon “Yolanda” struck on Nov. 8. RAFFY LERMA

Edgar Tabacon, DPWH Eastern Visayas assistant director, said the completion of the bunkhouse project was hampered by bad weather during the late part of December and early January.

He said the delay was also caused by  the lack of construction materials that had to be bought outside  Eastern Visayas and shipped here.

The bunkhouses are made of corrugated sheets, plywood and coco lumber and measure

Each bunkhouse has 24 units, although big families are given two units. The partition per unit was collapsed to accommodate bigger families.

Idano said  292 families or 1,752 persons from Barangay 88, San Jose district, are now occupying 14 out of the 27 bunkhouses at Motocross Area along Barangay Caibaan.

One of them was Rosita Rabura, 53, whose family was among the 70 families who were moved on Wednesday to the bunkhouse at Motocross from Tacloban Convention Center, or the Astrodome, where they had been staying for three months.

She said she felt relieved that she and her five children were finally moved to the bunkhouse.

“I think, our condition will somehow be better at the bunkhouse than here at the evacuation center. Living in a tent is not that easy. When the weather is hot, we cannot stay inside the tent, and when it rains, water drips inside so we cannot sleep,” Rabura said.

Rabura and the rest of the families would continue to receive food relief from the DSWD, said the camp manager of the Motocross, social worker Agnes Bugal.

With the transfer of the 292 families, more than 50 families are still living in makeshift tents at the Astrodome.