The expanding kingdom of God’s ‘son’ 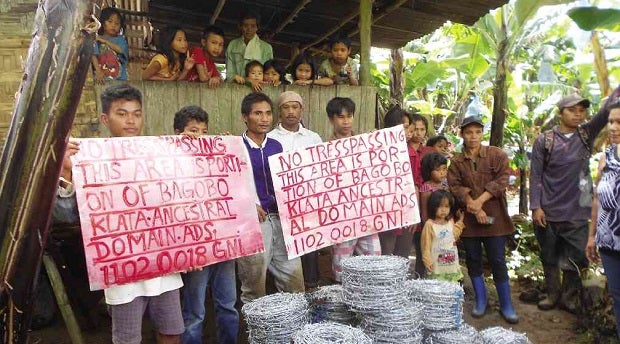 MEMBERS of the Bagobo-Klata tribe prepare to fence off their land. GERMELINA LACORTE

Looking out of the window in a hut half-hidden from the road by thick banana leaves, Adelina Awog Guillego, 57, recounted how more than 40 men, armed with rifles and bolos, arrived in her village in Barangay (village) Manuel Guianga here almost a month ago, telling the people to leave.

“Some of them went to the house of my son, Ruben,” Guillego said, motioning to the woman sitting in a corner, her daughter-in-law, who, like herself, had sought refuge with relatives here after the armed men forced them to leave their village in Sitio Diolo.

“They said, ‘You have to leave because we are taking over. This land has been sold already to Pastor Quiboloy,’” said Guillego, who now lives with relatives in Sitio Dominguez. Pastor Apollo Quiboloy heads the religious sect Kingdom of Jesus, The Name Above Any Name.

Quiboloy, who has a TV show, claims to be the appointed son of God.

“There were many of them, and they were armed,” said Danny Diarog, a resident of Sitio Kahusayan who was in Diolo when the armed men arrived.

“They told the villagers that Pastor Quiboloy already want the land; they had a way of saying it that made the villagers flee,” said Diarog, vice chair of the group Kahugpungan sa mga Lumad.

“They said, ‘We don’t want to harm the children,’” said Diarog, whose father, Bagobo Datu Dominador Diarog, was killed in 2008 allegedly after he refused to sell part of his ancestral domain adjacent to Pine Forest, which is some 3 kilometers from Prayer Mountain, Quiboloy’s main residence.

Diolo is just a kilometer from Sitio Kahusayan, where the sect planted a pine forest surrounding Prayer Mountain.

Members of Quiboloy’s sect, however, denied the pastor had anything to do with the land claim in the area.

Ricky Fuentes, a member of the sect, told the Inquirer a different story. He said former lumad residents of Sitio Diolo had turned over their rights to Jesus Christ Workers and Members Cooperative, in exchange for cash or goods from the cooperative.

Fuentes, who claimed to be the land coordinator of the cooperative, said the group had acquired the rights from the lumad as early as 2007, so that when group members went to the area in January this year, there were no more people in Sitio Diolo.

“When we arrived on Jan. 23, our group was not armed,” Fuentes said. “They’re lying,” he said of the lumad stories.

“How can they say we were not there, when we (the women) were all there, inside our houses, we even sat huddled together?” Guillego said.

“Would we flee if they were not armed? They had long firearms and likong (long blades),” Guillego said.

“The armed men arrived at 8 a.m. We left the place at

Almost a month after living with relatives, Guillego said she was worried about the things she had left behind.

“I left all my things: my mat, the kettle where I cook food, the plates—everything, even the chickens,” she said.

“I long to go home but we were told we can’t go back because once we go back they will shoot us,” she added.

Sitio Diolo, made up of 20 lumad households, forms part of the 6,800-hectare ancestral domain claim of the Bagobo-Klata tribe that straddles 10 lumad communities in Barangay Manuel Guianga.

Apo Sicay, head of the federation of the 10 communities covered by the 6,800-hectare ancestral domain claim, said their certificate of ancestral domain title (CADT) was already up for deliberation by the National Commission of Indigenous Peoples en banc and that the title would be issued soon.

“We hope to get it soon,” said Apo Sicay, who added they had applied for the CADT in 1997, which was about the time when the Indigenous People’s Rights Act became law.

But the presence of armed men in Sitio Diolo also sent the lumad in the next sitio of Amben, also one of the 10 communities covered by the ancestral claim, restless.

Apo Sicay said most villagers in Amben had fled their homes as early as August 2012 after the mysterious burning of 13 houses in the area. The villagers return only to work on their farms.

“How can we defend our land, when they (armed men) only have to cross the river and they’re already there?” villagers said.

They thought of fencing off their land.

Over the weekend, lumad in adjacent villages started fencing off the perimeter of their ancestral domain.

“So far, the activity is still peaceful,” Apo Sicay said.

Mayor Rodrigo Duterte had sent the chief of the Tugbok police to clear the area of armed men and allow the lumad to return to their homes but the lumad said the armed men in Diolo ignored the policemen. Duterte said he, too, believed that the pastor had nothing to do with the armed men.

“I don’t believe Pastor Quiboloy would take away the lumad lands, but whoever is there should clear away,” Duterte said. “They don’t have any right to be there and should allow the lumad to go back,” he said.

As they arrange for a dialogue with the mayor this week, the Bagobo-Klata remains hopeful.

Some of them, however, are bracing for the worst as they know Duterte and Quiboloy are good friends.