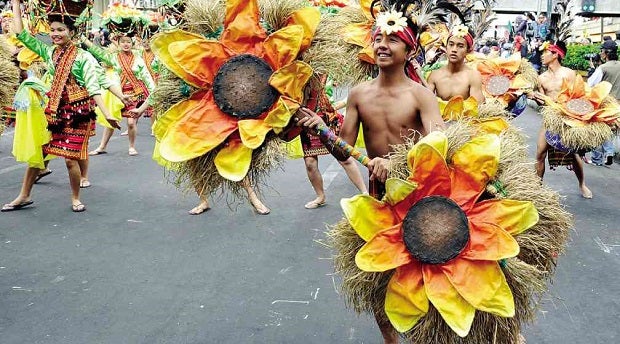 THE EMBLEM of the 19-year-old Baguio Flower Festival is the sunflower and it is the most common symbol used by participants in every staging of the Panagbenga, including this year’s. EV ESPIRITU/INQUIRER NORTHERN LUZON

BAGUIO CITY, Philippines—Children mixed and matched their Cordillera traditional attire with colorful costumes and props like flags, giant petals, sunflowers and butterfly wings as they danced through downtown Baguio City on Saturday for the 19th staging of the Panagbenga, or the Baguio Flower Festival.

Fifteen groups from various schools in the city and other towns of Benguet province performed for a crowd that gathered as early as 5 a.m., a practice some tourists and local families have mastered to get ahead of the thousands that pack Session and Harrison Roads every year.

Notable were students from Baguio City National High School who came out with props made of recycled materials, from the colored plastic bags that made up their parasols to used poles and coconut husks for their sunflower staff.

A delegation of students from Kabayan town in Benguet turned up with giant yellow and green petals shaped like warrior shields. Girls dressed as butterflies danced around boys wearing G-strings.

The parade’s earliest spectators shivered from the 10.5 degrees Celsius temperature that was recorded at 5 a.m., the government weather bureau said. 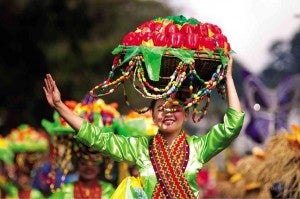 BAGUIO City once again bursts in colors as the summer capital celebrates the Panagbenga, or the Baguio Flower Festival. On Saturday, school children joined the grand street dancing parade, the first of two parades that highlight the monthlong festival. RICHARD BALONGLONG/INQUIRER NORTHERN LUZON

Baguio Flower Festival organizers, city officials and residents have managed to mount the annual tourist-drawing festival with some measure of efficiency after 19 years.

Traffic running through downtown Baguio went slowly but smoothly on Saturday morning and garbage left by spectators were contained to a minimum by volunteers who swept and collected trash.

The Department of Public Works and Highways posted warnings on pedestrian bridges, alerting crowd control officers that each bridge can accommodate only 200 people.

The organizers also cut the duration of the Saturday parade down to under two hours without sacrificing the participants’ choreography. The longer performances were mounted instead at the Baguio Athletic Bowl at Burnham Park.

Traffic police officers and augmentation teams from criminology schools, and the Boy Scouts and Girl Scouts of the Philippines were also sent to major parks where tourists normally proceed once the parade ends, such as Lourdes Grotto and Wright Park.

He created the Panagbenga to attract both interest and investments to Baguio as it slowly recovered from the 1990 Luzon earthquake.

But Bangaoet has been studying how to solve festering problems that the festival encounters year after year in order to stage a near-perfect Panagbenga on its 20th year in 2015.

For instance, he wants the city government to assign a permanent home for the annual Baguio Blooms (formerly Market Encounter, which showcases a landscaping exhibition augmented by a bazaar).

“Every year we have to beg the city, ‘Can we use this? Can we use that?’” he said in an earlier interview.

He cited this year’s landscaping exhibit, which was delayed when Baguio Flower Festival Foundation Inc. and members of the city council debated the use of Lake Drive at Burnham Park to host this activity.

“We should decide once and for all on permanent sites for certain activities. Why? So we can be well prepared. We have to ensure that there is ample water supply. We must see to it that there is power supply … And we have to consider the traffic situation,” he said.

He also wants to revisit the lengthy festival program, which now lasts a month.

“Personally, I would rather have it shorter. When we started this, it was only for nine days. But when the city got involved, officials wanted to make it a whole month. I think it is best to have it in two weeks because we have to consider the fatigue factor. Too much of a good thing sometimes can be tiring,” Bangaoet said.

He said the festival needed to invent new activities, hoping to draw up “impact projects that showcase the beautiful flowers of the region.”

“Last year, we started the boat racing competition. I hope there will be activities at Children’s Park [at Burnham Park] for the children to enjoy,” he said.

Bangaoet said he understood how the festival had taxed the nerves of Baguio residents.

“Why do we have this special activity called ‘Handog ng Panagbenga sa Pamilya Baguio?’ Started two years ago, this is a special day at Burnham Park to encourage local families to come and enjoy so they won’t think that the Panagbenga is just for tourists,” he said.

Read Next
Only 27 bunkhouses completed in Tacloban
EDITORS' PICK
A delightful blessing!
Gov’t plans to open COVID-19 vaccination for 5- to 11-yr-olds by January 2022
Gov’t eyeing COVID-19 vaccine booster for essential workers, indigents by Dec. 10
Villar Group gears up for AllValue Shopping Party on Dec. 3; around P 1-million promos and discounts up for grabs
Omicron variant detected in more countries as scientists race to find answers
Legarda: Ending Violence Against Women, a cause for all
MOST READ
Omicron poses ‘very high’ global risk, countries must prepare–WHO
Quiboloy warns of ‘much worse than Omicron virus’ if his ‘persecution’ is not stopped
Bongbong Marcos’ conviction in tax case not a crime involving moral turpitude — lawyer
Marcoleta defends pol ads on ABS-CBN
Don't miss out on the latest news and information.