Marcos: ‘I did not receive any DAP fund’ | Inquirer News 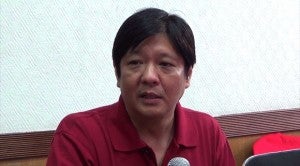 “I did not receive any DAP fund. And if it was indeed a bribe to secure the conviction of Corona, it was illogical for me to be rewarded with the DAP funds because I voted to acquit him,” Marcos said in a statement.

He was reacting to reports that he was among the four senators, who had allegedly received a total of P370 million from the DAP funds during the impeachment trial of then Chief Justice Renato Corona.  The three others were Senators Jose “Jinggoy” Estrada, Ramon “Bong” Revilla Jr. and Vicente “Tito” Sotto III.

Marco said  he already answered and denied the  allegation in a statement he issued in September last year when  his name was first linked into the  DAP controversy.

He reiterated that his signature in the documents involving the National Livelihood Development Corporation (NLDC) identified with Napoles was “falsified, citing on an internal investigation conducted by his own office.

The results of the investigation, Marcos said, were transmitted to the Commission on Audit “in the hope that it could aid the agency with its audit.”

“Considering all these facts, it is reasonable to conclude that some people must have maneuvered the documentations and appropriated the DAP funds themselves,” Marcos added.

But Senator Miriam Defensor-Santiago said the test for bribery was not whether it was given before, during or after Corona’s impeachment but whether the amount was “sufficient” to change a person’s decision.

“So, you have to ask yourself, was the amount sufficient to make the senator change his mind? For example, it is a basket of mangoes; he’s not going to change his mind. But if you gave him P50 million, that would change his mind,” Santiago said when asked about the issue during a press conference at the Senate.

“Senators are notorious for fickleness of mind. You have to understand, therefore that whether it is given before, during, or after is not a valid point. The only point we consider is was it sufficient to make the senator make up his mind, or change his mind if he already made it up, or at least change the perspective from which he is viewing the proceedings of the impeachment trial,” she further said.

Asked about the case of Marcos, who voted against Corona’s impeachment, Santiago said: “According to my test, no. Maybe because it was not enough. So bribery also has a certain calculus of its own. Remember what I’ve said, it must be sufficient to change his mind.”