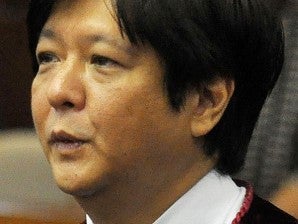 Contrary to his claims that his signature was forged, Sen. Ferdinand Marcos Jr. had written letters to then Senate President Juan Ponce Enrile and the Department of Budget and Management (DBM) specifically endorsing a Janet Lim-Napoles agency to implement a P100-million livelihood project, Budget Secretary Florencio Abad said Thursday.

The amount was part of a P475-million facility the DBM had extended to the Department of Agrarian Reform (DAR) to bankroll livelihood projects of local government units (LGUs) in 2011 as lump sum allocations for six senators.

However, the DAR, burned by the alleged misuse of P900 million from the Malampaya Fund in 2009, refused to have anything to do with the money, the Inquirer has learned.

A DAR official, who requested anonymity, said the department did not want to be used as a “clearinghouse” following the 2009 shenanigans.

Marcos last week claimed that his signature was forged to facilitate the release of his P100-million share to the nongovernment organizations (NGOs) controlled by Napoles—Agricultura para sa Magbubukid Inc. and Agri and Economic Program for Farmers Foundation Inc.—with the National Livelihood Development Corp. (NLDC) as the implementing agency in March 16 last year.

The namesake son of the late dictator said that his funds were sourced from the DBM’s disbursement acceleration program (DAP), which the DAR official claimed was the source of the P475-million facility.

Abad refuted Marcos’ claims that his signature was faked. He insisted that Marcos sought the funding and even requested for a switch in implementing agency.

Abad stressed that the legislators and not the DBM normally determined the implementing agency “as well as the purpose for the request of funds.”

“That’s the senator’s contention but that’s not what our records show,” Abad said of the Marcos allegation. “He wrote Senate President Juan Ponce Enrile through Sen. Franklin Drilon on Nov. 23, 2011, requesting an endorsement of his request. Then he wrote the DBM on Feb. 8, 2012, requesting that the implementing agency be changed from DAR to NLDC,” said Abad in a text message.

Abad also clarified Marcos’ assertion that the P100 million given to him was from DAP.

“This is not a fund. It’s a measure we adopt to accelerate budget execution. Allotments not used—such as items not filled, decrease in interest payments, procurements deferred—with the President’s approval, are realigned to fast moving projects (such as the Department of  Public Works and Highways infrastructure projects) or those urgently required (such as the rehabilitation of areas damaged by Typhoon “Pablo”) or those that need augmentation (such as hiring additional policemen) or request from officials due to urgent needs in their constituencies. The latter represents a small portion of the DAP and that is where Senator Marcos’ request to assist displaced/marginal family constituents was funded from,” Abad said.

Abad denied that the P475 million given to the DAR had any strings attached. However, he did not comment on the nature of the P475-million fund which the DAR did not request.

The DAR official claimed that the P475 million was meant as an inducement for senators to side with the government in the impeachment trial of then Chief Justice Renato Corona, who was impeached by the House of Representatives in December 2011.

But Abad vehemently rejected this allegation, claiming this  was “illogical” considering that Marcos voted against impeachment in the Senate vote that found Corona guilty of fudging his statement of assets, liabilities and net worth.

Based on documents obtained by the Inquirer, the DBM released six special allotment release orders (Saros)—from E-11-01881 to E-11-01886 on Dec. 6, 2011—to the agrarian reform secretary for the “requirements of the program beneficiaries development component of the Comprehensive Agrarian Reform Program.” The six Saros were divided in the following amounts—P100 million (for three Saros), P70 million, P55 million and P50 million.

Attached with the six Saros were the NCAs, or notice of cash allocations, (depositing the funds at the Land Bank of the Philippines, Quezon Circle branch) issued on the same date “to cover for the requirements of the livelihood projects in various local government units with existing agrarian reform communities in support to farmer beneficiaries.”

A DAR source noted the undue haste in releasing the funds as NCAs were normally issued months after Saros had been distributed. Both Saros and NCAs were signed by Budget Undersecretary Mario Relampagos who noted that the “release is in accordance with the OP (Office of the President) approval dated Oct. 12, 2011.”

The DAR source said the agency’s officials were not keen on taking a generous amount of fund on top of their regular allocation which they did not even request. The source said the agency’s officials had already been alarmed by the DAR’s involvement in the P900-million Malampaya Fund scam, especially after receiving in June 2011 a memorandum from the Commission on Audit ordering a special audit on the P23.6-billion government share in the operation of gas field off Palawan province released by the DBM directly to the agencies under the Arroyo administration.

On March 15, 2012, the DBM issued a “negative” Saro for the fund signifying the DAR’s refusal to handle the money.