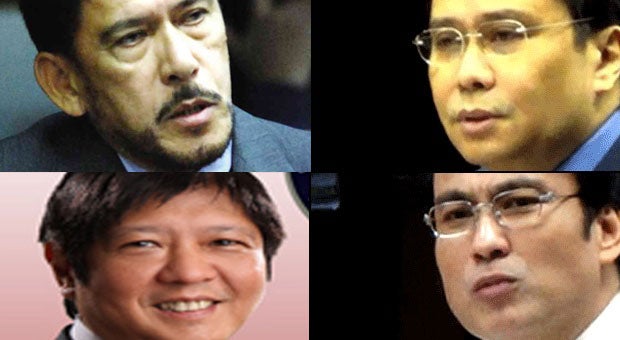 The DAP funds, which were on top of the P200 million from the Priority Development Assistance Fund (PDAF) for each senator, ended up in dubious nongovernment organizations (NGOs) controlled by businesswoman Janet Lim-Napoles.

Napoles is the alleged brains behind the P10-billion pork barrel scam in which the PDAF funds meant to help poor Filipinos instead lined the pockets of lawmakers as well as those of their key aides, the businesswoman and certain agency officials.

One of the whistle-blowers in the pork barrel scam submitted a ledger to the Department of Justice showing that the DAP releases of senators that were coursed through state-owned National Livelihood Development Corp. (NLDC) were under the code names “Sexy,” “Bongets,” “Pogi” and “Bigote.”

Estrada on Wednesday said he would check his records before making a comment.

Sotto said he didn’t know about the DAP release during Corona’s impeachment trial.  “I doubt if it’s true,” he said.

Marcos and Revilla had no comment as of Wednesday night.

NLDC, chosen as the implementing body, received the DAP funds that critics said were another form of pork barrel in March 2012.

The timing of the releases was contrary to what Budget Secretary Florencio B. Abad said in September last year that 20 senators were given a total of P1.107 billion from DAP a few months after they voted to convict Corona.

The budget secretary was then reacting to Estrada’s privilege speech in which the senator insinuated that the P50 million in additional pork he received after Corona’s ouster was a bribe or an incentive for voting to convict Corona.

In the impeachment trial that started on Jan. 16 and ended on May 29, 2012, Corona was convicted for not declaring certain bank deposits in his statement of assets, liabilities and net worth.

In a text message, Abad on Wednesday said that the Saros (special allotment release orders) for the DAP funds were released in October 2011, or about eight months before Corona’s conviction.

“An NCA presupposes an allotment release well ahead of disbursements for which you need an NCA. So, the release of Saro may have been made way before (the) release of NCA. That is because an NCA is payment for work already done or goods already provided. So, a Saro may have been issued in October 2011 but its NCA issued only in March 2012,” Abad said.

“Second, NCAs, like Saros, are never released to legislators but always to implementing agencies [IAs]. And NCAs are normally requested by IAs to pay for work done or goods delivered,” he added.

Pork barrel whistle-blowers led by Benhur Luy, however, claimed that only portions of the alleged kickbacks for senators and representatives were given to the lawmakers upon the issuance of the Saro. The full payment, they said, came with the release of the funds through the NCA.

In a letter to NLDC president Gondolina Amata dated April 2, 2012, Budget Undersecretary Mario Relampagos confirmed that the P370 million worth of NCAs for Estrada, Marcos, Revilla and Sotto would be released through her agency.

Relampagos said the funds were “part of the fiscal year 2011 Disbursement Acceleration Program of the President dated October 12, 2011, which is distinct from the Priority Development Assistance Fund.”

Both Amata and Relampagos have been charged with plunder in the Office of the Ombudsman by the National Bureau of Investigation—Amata in the PDAF scam and Relampagos in the Malampaya Fund scam.

The Malampaya Fund scam refers to the diversion of P900 million meant to help victims of two storms in 2009 to Napoles and her NGOs and officials.

Relampagos wrote Amata in reply to her letter of March 30, 2012, in which she hesitated using NLDC as a conduit for the release of the NCAs to the senators “intended for the immediate provision of livelihood assistance in the areas affected by the typhoon and earthquake primarily in Visayas and Mindanao.”

A portion of the funds went to livelihood projects in Negros Oriental province, which was struck by a 6.9-magnitude earthquake on Feb. 6, 2012, a month before the DAP funds were released to the four senators.

The NLDC president sought clarification from the DBM because she wanted to know “if the NLDC can still serve as an implementing arm for the said projects [despite] the fact that our institution is not anymore listed for PDAF undertaking.”

Amata wrote Abad in October 2011 to request that NLDC be allowed to “abstain from these subsidized undertakings.”

She noted that while NLDC was delisted as a conduit from the PDAF menu in the 2011 budget (after its initial inclusion in 2009), it was used as conduit for the release of P1.3 billion of 2010 pork funds in the first six months of 2011.

A source from NLDC, who asked not to be named for lack of authorization to speak for the agency, said Estrada, Marcos and Revilla each received P100 million in DAP funds, and Sotto, P70 million.

Abad tells SC: DAP not used to give incentives to senators