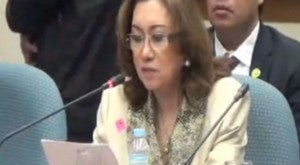 This was how Ruby Tuason, the new whistle-blower in the P10-billion pork barrel scam, described allegations that she was being used by Sen. Juan Ponce Enrile to sabotage the plunder case against him, along with Senators Jinggoy Estrada and Ramon Revilla Jr.

In a telephone interview on Wednesday, Tuason said that the P40 million in commissions, which she had received from deals for alleged scam mastermind Janet Lim-Napoles for the use of the lawmakers’ Priority Development Assistance Fund (PDAF) allocations and which she intended to return to the government, would not come from Enrile.

“It is illogical to say that Enrile sent me home and give testimony that would pin him down,” Tuason told the Inquirer. “It’s not true that the P40 million will come from JPE, it will come from my own pocket.”

The former social secretary to deposed President Joseph Estrada, who is now Manila mayor, told the Senate blue ribbon committee last Thursday that she planned to sell her house at the swank Damariñas Village in Makati City to raise the reimbursement money.

According to the records in the village homeowners’ association office, Tuason owns a house on Carissa and Lumbang streets with a lot area of at least 1,200 square meters estimated to be worth P360 million.

Benhur Luy, a former aide to Napoles who has turned whistle-blower, said Tuason received at least P35 million in “rebates” for the transactions she had arranged for Napoles.

A businesswoman, Napoles is under police custody for allegedly detaining Luy for three months in a bid to prevent him from revealing her illegal deals to authorities.

Tuason fled to the United States after the scandal broke out and she was named, along with Enrile, Estrada and Revilla, among 38 people under investigation by the Office of the Ombudsman in connection with the PDAF scandal. They have all denied wrongdoing.

Tuason returned on Feb. 7, saying her conscience bothered her. She has applied to become a state witness.

In a sworn affidavit, the 62-year-old Tuason said she delivered to Enrile’s top aides—Jessica Lucila “Gigi” Reyes and Jose Antonio Evangelista—some P77 million in kickbacks from the use of Enrile’s PDAF allocation for ghost projects of Napoles from 2007 to 2009, according to Levito Baligod, lawyer for the whistle-blowers.

The widow of the late sportsman Butch Tuason also said she gave Estrada P35 million in commissions, some of it right in his Senate office.

Tuason brushed aside suggestions by Sen. Antonio Trillanes IV that her testimony was “worthless” and would benefit Enrile because Tuason insisted during the Senate hearing that she was unaware if Enrile knew that the kickbacks she was delivering to Enrile’s aides were for the senator.

Tuason explained she wasn’t being evasive during Trillanes’ questioning. “As a witness, I do not want to give my opinion, but stick to the facts,” she said.

“He continues to have my trust and continues to protect me and give me good counsel,” Tuason said. “I have no doubts about his loyalty.”

In a privilege speech on Tuesday, Estrada indicated that Tuason might have dealt with other senators in his role as Napoles’ bagman. He said Sen. Teofisto Guingona III, the chair of the blue ribbon committee, should have asked Napoles that question but did not.

Trillanes on Wednesday said Estrada was probably aware that Tuason had made other deals for Napoles with other senators. Trillanes said Estrada should have named them on Tuesday during his privilege speech.

“Nobody was stopping him,” Trillanes said. “He should name who they are. It’s as if we’re writing a blind item here … It’s like he’s threatening or leveraging against somebody.”

Told about Trillanes’ challenge, Estrada said: “It’s not in my character to implicate my fellow senators. Let others do it.”

Estrada said Tuason had told him that there were other senators who had accepted her offers to use their PDAF allocations but that he did not know if they involved Napoles’ dubious nongovernment organizations.

“They weren’t so much about soft (projects such as livelihood programs) but hard (infrastructure projects),” Estrada said. “That’s as far as I can go.”

Not a Drilon caterer

Senate President Franklin Drilon on Wednesday distanced himself from Tuason.

“She did not approach my office,” Drilon told reporters. He said he knew Tuason only as President Estrada’s social secretary. He said Tuason did not cater food to his office.

Drilon, whose photograph with Napoles in one of her lavish parties has gone viral on social media, welcomed Estrada’s proposal to release CCTV footage to examine who among the senators Tuason had visited in their offices.

“We’re not hiding anything. This is a public place, but we have limitations,” Drilon said, referring to the sergeant at arms’ admission that the VHS records of the basement parking from 2002 to 2010 had been erased.

Drilon declined to comment on the value of the footage. “I do not want to pass judgment on that. It’s up to Senator Estrada to draw conclusions but all that they are asking that will be made public, we will,” he said.

Reporters asked Drilon about Estrada’s plea to have Estrada investigated by the Senate ethics committee instead of Guingona’s panel. Estrada said Guingona had prejudged him by declaring that Tuason’s testimony was like a winning three-point shot in the game of basketball.

Drilon said he and Senators Alan Peter Cayetano and Ralph Recto were “looking for a senator, who we can perhaps call neutral.”

De Lima: We have enough evidence vs pork scam suspects