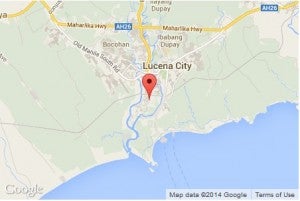 Supt. Allen Rae Co, Lucena police chief, said the suspect, Patrick Palermo Nobleza, 21, was nabbed by police elements inside his house in Barangay Cotta this city at around 5 p.m.

“He did not resist arrest,” Co said over the phone.

Citing initial information from Nobleza, Co said the elder Tam, 67, who also resided in the same village had asked the suspect to accompany him last Tuesday evening (Feb. 11).

“According to Nobleza, the old man wanted a night out with a woman (mambababae)” Co said.

On the way to nearby Tayabas City aboard the victim’s Crosswind Isuzu vehicle with the old man behind the wheel, Co said the duo had an argument.

“The suspect said the old man boxed him several times while they were inside the vehicle. In retaliation, the suspect killed the victim,” the police official said.

Post-mortem examination showed the victim died by strangulation and from a fatal wound in the head and different parts of the body.

Investigators also found bloody tire marks at the crime scene indicating that the victim was run over by a vehicle.

At around 11 a.m. the next day (Wednesday), the Crosswind with bloodstained interior was found abandoned in the village of Mayao Crossing in the outskirts of Lucena City.

Police found a wire cutter inside the vehicle, which investigators believed was used by the suspect in smashing the head of the victim.

The suspect is detained at the Lucena police station jail.