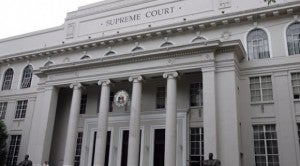 MANILA, Philippines—The Supreme Court concluded late Tuesday the third and last round of the oral arguments on the power rate hike case, with Chief Justice Ma. Lourdes Sereno giving all parties a nonextendable 15 days to file their memorandums regarding all the issues that were raised in the discussions.

At the five-hour-long session, the high court justices questioned the government lawyers representing the public respondents in the case, including the Department of Energy, Energy Regulatory Commission and the National Grid Corp. of the Philippines.

ERC chair Ma. Zenaida Ducut was questioned about the ERC’s order to Meralco to maintain the generation charge for the January 2014 billing at P7.37 per kilowatt-hour.

Associate Justice Marvic Leonen wanted to know how the ERC would ascertain and compute the real generation charges.

Ducut said the agency would require Meralco to “reconsider” its original demand for the calibrated collection of the P9.11/kWh generation charges.

Ducut, however, was unable to answer Leonen’s question as to whether the ERC had any specific regulations on the recomputation of the charges and if the ERC could recommend the administered price.

Leonen explained that he posed the questions to Ducut so that if the high court were to decide to remand the case to the ERC, the public should at least be assured that there was a methodology in determining the proper and fair generation charge for November.

Ducut said she wanted the investigation into the alleged price manipulation and anticompetition behavior to finish first after which she would consult with the other commissioners on what to do.

Sereno asked the ERC executive director, Francis Saturnino Juan, what the agency had done to protect the consumers when the prices of electricity became volatile and reached historic highs, beginning in July 2012.

Juan replied that this only meant that the electricity market system was “working” but the Chief Justice reminded him that the ERC should have been conscious about its mandate to provide consumers with electricity at the least cost.

“Did it warn you that the system will not provide the least cost, and the captive market (consumers) only understands one thing about least cost—it must translate to lower bills, and that is your statutory duty,” Sereno said.

The Chief Justice asked if the degree of diligence imposed on the ERC by the Electric Power Industry Reform Act (Epira) meant the agency should anticipate and review all occurrences in the electricity market to protect the consumers.

She noted that it was only now that ERC was reviewing the price caps.

Sereno earlier also questioned Energy Secretary Jericho Petilla about the failure of his department in the eight years since the Epira was enacted, to oversee the implementation of other reform measures in the law such as the setting up of an independent market operator, wherein the participants in the energy sector will not have a voice so that conflicts of interest will not happen.—Jerome Aning