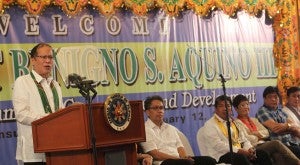 Speaking at the 2nd ARMM-local government Summit Wednesday, Aquino said the credibility and dignity of his administration was at stake if the peace deal failed.

The summit was attended by at least 100 city and town mayors, three provincial governors and the regional officers here.

The Malaysian-brokered peace deal could lead to the laying down of arms of one of the largest secessionist groups in Mindanao. However, the peace deal is opposed by other rebel groups—notably the Moro National Liberation Front (MNLF), which already has a peace agreement with the government, and a new breakaway faction known as the Bangsamoro Islamic Freedom Fighters (BIFF). An Extremist group known as the Abu Sayyaf has continued its kidnapping and bombing activities.

“Please give way to the steps we are taking. Rest assured our dignity and credibility are at stake in every agreement we sign,” Aquino said.

The President also praised the present ARMM administration under Gov. Mujiv Hataman for initiating reforms in the troubled region, which he said, would help pave the way for a better political entity. He even called Hataman the “poster man” for good governance.

A teary-eyed Hataman thanked Aquino and expressed that it could be his last time to address the ARMM Summit as he would immediately step down once the new entity is established.

The ARMM government will be using its P20 billion budget to fund the transition projects, he added.

At the provincial and municipal level, Maguindanao governor Ismael Mangudadatu said local campaigns have been launched to educate incumbent officials and constituents about the progress in the peace talks.

Both Hataman and Mangudadatu said they hoped the peace process would put an end not just to secessionist revolts but also to clan wars and poverty in the region.

Mangudadatu expressed concern over the continuing resistance of the BIFF faction and called on the Philippine military to arrest its leaders.

Mangudadatu said some suspects in the 2009 Maguindanao massacre have already joined the ranks of the BIFF.

Mangudadatu’s wife and relatives were among the 58 people who died in the massacre allegedly perpetrated by some members of the Ampatuan clan, former leaders of the ARMM.

In another hotel in Davao City, some 100 delegates gathered for a three-day Mindanao Civil Society Organizations Leaders Peace Summit. Groups from various areas in Mindanao are expected to present the results of public consultations held in behalf of the Bangsamoro Transition Commission (BTC).

The BTC is tasked to draft the Basic Law, the charter of the future Bangsamoro entity.

The government-MILF peace framework agreement will be incorporated in a proposed basic law to be submitted to Congress.  It must then gain approval in a referendum.