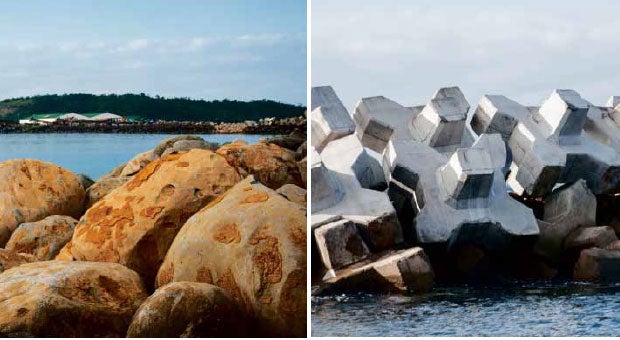 IS THIS WORTH P5.1B? The breakwater at Port Irene in Cagayan province, with a jack-stone layer on top of a “pile of rocks,” protects only the warehouses and vessels used in the used-car and black-sand industries, according to local residents. MELVIN GASCON/INQUIRER NORTHERN LUZON

SANTA ANA, Cagayan—When construction began for the breakwater at Port Irene in the fishing village of Casambalangan here, residents felt no excitement about the new infrastructure project in their neighborhood.

But when news broke last week that the project was worth P5.101 billion in taxpayer money, their jaws dropped.

“I may not be an expert in the construction business, but the P5-billion cost of that breakwater project is incredible. That figure boggles the mind,” said a village council member here who spoke on condition of anonymity.

The almost kilometer-long breakwater inside the Cagayan Special Economic Zone and Freeport is at the center of a controversy, with Sen. Miriam Defensor-Santiago asking the Department of Justice to investigate a possible involvement of Sen. Juan Ponce Enrile in the award of the contract to a construction company that has links with Enrile’s former chief of staff, lawyer Jessica Lucila “Gigi” Reyes.

The Inquirer broke the story last week. Enrile denied having anything to do with the project or with the builder, Sta. Elena Construction and Development Corp., owned by Alice Eduardo.

The Securities and Exchange Commission records showed that members of Reyes’ family are officers of Sta. Fe Builders Dredging and Equipment Corp., which shares an office with Sta. Elena in Manila’s Malate district.

Sta. Fe is listed as a director of MGNP Inc., a construction and general trading company formed by Reyes and members of her family in 2003.

Sought for comment, Joyce Jayme, information officer of the Cagayan Economic Zone Authority (Ceza), which manages the free port, denied allegations that the project was overpriced.

“Before the project’s implementation, the Philippine Ports Authority validated the cost and design of the breakwater, [and its] findings showed that the unit cost for each item is generally reasonable and acceptable, and that the unit cost per cubic meter in dredging work can be adopted considering the degree of difficulty in the performance of work,” Jayme said.

Santiago wants the justice department to determine whether Enrile used the free port in his home province to channel P5.101 billion in government funds to companies controlled by Reyes’ family.

She said Enrile also used the free port as the “main vehicle for smuggling and other illicit operations.”

Casambalangan residents said it would not need an expert to see that the breakwater was overpriced.

“During fishing trips, we often take our boats to the breakwater to check it out. We really cannot understand why it costs P5 billion. It is nothing but a pile of rocks,” a resident said.

An examination of the 750-meter structure showed that it juts out of the northern tip of Port Irene, extends for about 250 m, and bends northeast every 250 m.

The first and second segments, which, according to records, constitute the first two phases of the project, consist of a layer of jack stone-shaped precast concrete (PC) blocks randomly placed on top of a pile of rocks the size of a subcompact car extending down to the sea floor.

In the third segment, the jack stone blocks decrease in number and down to the end, only rocks are seen from the water surface.

The Ceza said in a report that the breakwater was needed to spur economic activities in Port Irene. It said existing structures at the port were “already structurally unsafe and highly vulnerable.”

“The use of PC blocks is designed to dissipate the force of incoming waves by allowing water to flow around rather than against it and to reduce displacement by allowing random distribution of PC blocks to mutually interlock,” the report said.

Fishermen here, however, said the breakwater protected only the port and the vessels involved in two controversial industries: the used-car importers and the processed black sand exporters.

“The breakwater has served only the facilities within the cove, nothing else. In fact, it has diverted destructive waves to nearby fishing communities, especially Rapuli village,” said Marciano Agonoy, a member of the town council.

Jayme said the Commission on Audit had determined that the total cost of the project was “generally reasonable and within the allowable limit of variance.”

“The Ceza envisions Port Irene to be the heart of its economic zone and free port, [and] the region’s entry point for commercial and industrial products. But before this can be attained, we must set the foundation first,” she said.