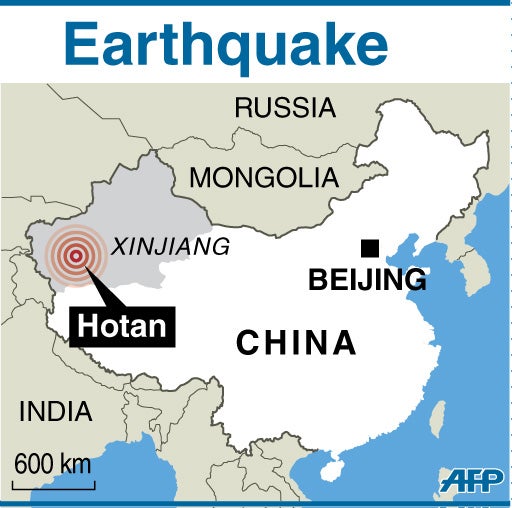 BEIJING—A strong and shallow 6.8-magnitude earthquake struck China’s far western region of Xinjiang on Wednesday, but in a sparsely populated area, the US Geological Survey said.

The tremor was only 12.5 kilometers (eight miles) deep but hit about 270 kilometres east-southeast of Hotan, the USGS said, in an extremely remote area.

China’s Earthquake Networks Centre gave the magnitude of the afternoon quake as 7.3.

Another tremor of magnitude 5.7 struck five minutes later, five kilometers deep, followed by a series of aftershocks of up to 4.2 magnitude, it said.

“We were at the office at the time and felt strong shaking, the windows were rattling,” a reporter in Keriya county near the epicenter told state broadcaster CCTV, adding that few people lived in the mountainous area.

The civil affairs ministry said there had been no reports of casualties but it was likely that some houses had been damaged, the Xinhua news agency said.

CCTV reported that Hotan was not seriously affected, while several people in the city told AFP they felt less than a minute of shaking.

“The earthquake lasted less than one minute, it was not strong, there are no buildings collapsed,” said one resident by phone.

An expert told CCTV that the affected area often experienced earthquakes but was thinly populated, so the impact was likely to be limited.

China is regularly hit by earthquakes, especially its mountainous western and southwestern regions.

A magnitude-6.6 earthquake in Sichuan province in the southwest killed about 200 people last April, five years after almost 90,000 people died when a huge tremor struck the same province.

Twin 5.6- and 5.9-magnitude quakes killed at least 95 people in the northwest province of Gansu last July.

It is home to the country’s mostly Muslim Uighur minority, and has seen sporadic attacks on police amid complaints by the ethnic group of religious and cultural repression.

Beijing has justified tighter security in the area to stem a separatist movement it claims has links with foreign terrorist groups.

Xinjiang is rich in natural resources, containing roughly 30 percent of China’s onshore oil and gas deposits and 40 percent of its coal, according to the official website china.org.