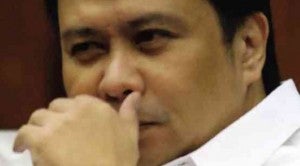 MANILA, Philippines—Some senators had also eaten the food that suspect-turned-state witness Ruby Tuason had brought  to Senator Jose “Jinggoy” Estrada in the Senate.

A day before Tuason  is set to appear before the blue ribbon committee on Thursday,  Estrada  disclosed that he had also shared  with some of   his colleagues the food  that  Tuason  had personally delivered  to him in the chamber.

“The food that she gave me, she delivered to me, I also shared   it with  some senators because she brought trays full of snacks,” the senator said of Tuason.

Tuason, who is also charged with plunder  at the Office of the Ombudsman, alleged in her affidavit that she  brought  Estrada’s  commissions for funnelling his pork barrel funds to bogus non-government organizations, to the Senate.

But the senator  strongly denied the allegation and even requested the chamber to release  the  CCTV footages  to  prove  his accuser wrong.

“Of course, it hurts. It hurts. Because  in the first place there’s  really nothing. That’s  why I’m requesting to release the  footages of the CCTV really  verify if indeed Tita  Ruby  delivered money to  me,” Estrada said.

Saying  it was “unfair” to single him and  his family  out in the pork controversy,   Estrada also dared  his accusers  to name  other  senators , who might have been involved in the scam.

“I hope they will also identify  other senators, whom  they are trying to protect, those that they don’t want them  to  name.  They  should  also expose  them if  they really have  documents,” he said.

Estrada, who had  inhibited   from the  Senate  probe on the issue,  said  he might just  probably  watch    Thursday’s hearing, which he described as another “telenovela” and “zarzuela.”