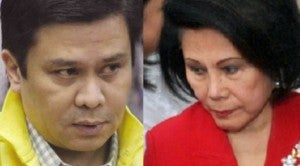 Before “Sexy,” Sen. Jinggoy Estrada (left)was given the code name “Anak” and his mother, former Sen. Loi Estrada (right), was “Inay,” according to sworn statements issued to the National Bureau of Investigation. INQUIRER FILE PHOTOS

“She feels so bad, she feels so upset on what’s happening. I hope she’ll be spared. My mother has nothing to do with this,”   he told reporters of the latest report linking  her mother into the “pork” scam.

“This might be one of their plans to pin me down but I still have faith and confident that the truth will set us free,” he said in another interview.

Aside  from  his mother, more names have also been dragged into the allegedly anomalous disbursement  of lawmakers’ pork barrel funds,  including a certain  Justa Tantoco and actor  Matt Ranillo.

Senator  Estrada confirmed   that Tantoco is a “very close friend” of his mother  but said; “She has nothing to do with  this.”

“I don’t know  why her name  cropped  up in the affidavit,”  said the senator.

He  also  denied  any dealing  with Ranillo.

“I have never dealt with Matt Ranillo. I only know him because  he’s also an actor. He belongs to the  movie industry,”  the senator added.