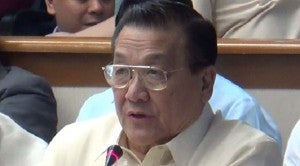 He described as “alarming” the observation that “these two agencies merely react when death occurs in vehicular mishaps.”

“Had the LTFRB and LTO done their jobs, that is, monitoring round-the-clock the franchises and operations of bus companies, then serious road accidents involving buses and other public utility vehicles could have been prevented,” Arranza said in a press statement.

“It is only now that they are discovering that the GV Florida Transport bus involved in the Feb. 7 crash in Bontoc, Mountain Province, that killed at least 14 passengers was not even registered under the name of the said company,” he said. “Moreover, the bus’ license plates did not match with the engine and chassis. Worse, it was also discovered that the bus had double license plates.”

He added, “It’s time for top officials and other personnel of these two agencies to wake up.”

Last Saturday, the LTFRB ordered all of the estimated 250 buses of Florida off the road as it suspended the bus company’s operations for the next 30 days.

Operating out of its main terminals in Sampaloc, Manila, and Cubao, Quezon City, Florida plies routes to 40-plus  cities and towns in Ilocos, Cagayan Valley and the Cordillera Administrative Region.

Manuel Baricaua, administrative chief of the LTO office in Region 2, said that the bus company might also have to answer allegations that it has been operating buses illegally, allegedly including those under Dagupan Bus Line and Cable Tours, the listed operator of the bus in the Bontoc accident.

Last week, he led an  inspection of about 40 buses parked at the Florida terminal in Tuguegarao City.

LTO personnel found that at least 17 of the buses were in violation of franchise rules, such as switched license plates and unrecorded engine numbers, among other thing.

Last month, the LTFRB canceled the operating license of Don Mariano Transit following an accident on the Skyway in which 18 persons were killed and more than a dozen others injured.

Father hugged me. I was saved – Florida bus crash survivor