Before he was ‘Sexy,’ Jinggoy Estrada was ‘Anak,’ Sen. Loi was ‘Inay’ 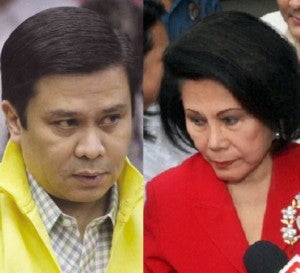 Before “Sexy,” Sen. Jinggoy Estrada (left)was given the code name “Anak” and his mother, former Sen. Loi Estrada (right), was “Inay,” according to sworn statements issued to the National Bureau of Investigation. INQUIRER FILE PHOTOS

MANILA, Philippines—Before “Sexy,” Sen. Jinggoy Estrada was given the code name “Anak” and his mother, former Sen. Loi Estrada, was “Inay,” according to sworn statements issued to the National Bureau of Investigation.

Loi Estrada, like her son, channeled some of her allocations under the Priority Development Assistance Fund (PDAF) to nongovernment organizations (NGOs) controlled by Janet Lim-Napoles, according to the statements executed by Benhur Luy.

But Luy, the principal whistle-blower in the P10-billion pork barrel scam, said the NGOs implemented the mother’s projects and that she received a 40-percent commission.

Jinggoy Estrada, together with Senators Juan Ponce Enrile and Ramon Revilla Jr., Napoles and 34 others, is facing a plunder complaint in the Office of the Ombudsman in connection with allegations that PDAF allocations went to ghost projects or kickbacks. They have denied wrongdoing.

NBI witnesses, in their sworn affidavits, had submitted notebooks containing records of Napoles’ alleged deals with the lawmakers.

Enrile, Estrada and Revilla were referred to in the notebooks by their code names “Tanda,” “Sexy” and “Pogi,” respectively.

In an interview with the Inquirer on Tuesday, Luy said Jinggoy Estrada had persuaded his mother to allocate her PDAF to Napoles.

“The projects of Senator Loi were fully implemented, but like her son’s projects a commission of 40 percent was also deducted from the project’s amount,” said Luy, a former employee of Napoles, who is under detention allegedly for holding Luy hostage to prevent him from revealing her activities to authorities.

Another document also showed that Loi Estrada in a letter on Jan. 11, 2006, to then Agriculture Secretary Domingo Panganiban directed that P10 million of her PDAF with Saro No. ROCS-05-07-593 dated Dec. 29, 2005, be channeled through the Ginintuang Masaganang Ani Rice and Corn program of former President Gloria Macapagal-Arroyo.

Loi Estrada said the allocation was for the implementation of agricultural livelihood projects through another Napoles organization, the Masaganang Ani para sa Magsasaka Foundation.

Jinggoy Estrada also wrote Panganiban in a letter on Aug. 15, 2005, asking for the transfer P30 million of his PDAF to another Napoles NGO—People’s Organization for Progress and Development Foundation Inc.—to implement his project under Saro No. E-04-948 dated Dec. 15, 2004.

The document received by the secretary’s office on Oct. 11, 2005, also bore a marginal note with an instruction to Director Ricardo Regis to expedite the process.