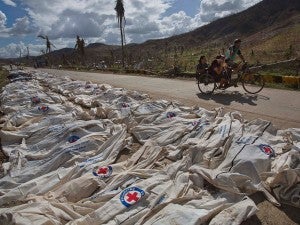 TACLOBAN CITY, Philippines—More than three months after Super Typhoon Yolanda, the Office of Civil Defense still has to validate the number of deaths the world’s strongest storm on record left in Eastern Visayas.

However, Angelo Bacho, assistant operations chief of OCD’s Region 8 office, said that it was undertaking a “recounting” of the number of fatalities because this would form the basis for the financial assistance it would extend to the families of those who perished.

A claimant could receive P10,000 per death in the family and P5,000 for each of those injured during and in the aftermath of the typhoon, which ravaged the region on Nov. 8, 2013.

Aside from this, Bacho said, his office was also getting requests from various companies for verification of some deaths.

“Apparently, the persons being asked have financial obligations to these companies,” he said.

So far, the RDRRMC has recorded 5,803 deaths in Eastern Visayas due to Yolanda, based on reports from the city, municipal and provincial disaster councils. Of this number, 2,606 were in Tacloban, considered Yolanda’s “ground zero.”

However, the OCD claims there have been double-listings, bloating the death toll, Bacho said.

“We have noticed that several names on the list (of fatalities) appeared twice. For example, a barangay chairman submitted a report  identifying the victim as a son of Pablo and here comes the relative of the victim giving the full name, but this error is not corrected, so the double listing happens,” Bacho said.

The OCD Region 8 office was able to get the exact number of fatalities by going to the barangays and talking personally with the residents to verify if they have lost relatives due to Yolanda, he added.

“We can really say that our list is true as this is verified by the family members of those who were killed by Yolanda,” Bacho said.

The teams coming from various regional offices of the OCD have been conducting their post-disaster needs assessment, including the number of fatalities, since January 13.

And since they started their assessment, they have so far removed at least 100 names from the list of the dead in Palo, he said.

The final death toll in Palo has come down from 902 to 720, Bacho pointed out. The fatalities came from 18 of the town’s 33 barangays.

In the case of Tacloban, Bacho said, they have also found some double entries but he could not say the exact figure as they were still in the process of preparing a verified list.

Of the 138 barangays in Tacloban, 54 have recorded fatalities due to Yolanda.

The death toll in Tacloban currently stands at 2,606, with about 700 listed missing.

As of Tuesday, the OCD had so far received 96 claims for financial assistance. The claimants were from Tacloban City and the towns of Palo, Pastrana, Julita, all in Leyte, and Basey, Samar.

PH thanks for ‘Yolanda’ aid lights up world billboards