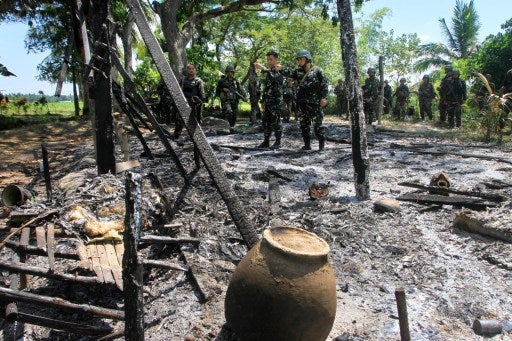 ZAMBOANGA CITY— Nearly five months after surviving the battle for Zamboanga between Moro rebels and government forces last September, death continues to stalk residents who lost their homes in the three weeks of fighting and are now housed in a refugee camp.

The latest victim is 14-year-old Omar Sahid, who died Tuesday morning at the Don Joaquin Enriquez Memorial Sports Complex. Sahid’s death brought to 87 the number of people, mostly children, who have died since then in the evacuation centers.

At the Don Joaquin Enriquez Memorial Sports Complex alone, there are a total of 118,819 evacuees.

“We all think that the grandstand is our dying place,” said evacuee Omar Dalawis, a madrasah teacher who serves as one of the camp managers at the sports complex.

He is also a volunteer of the Darul Iftah, an Islamic religious group which has a tent inside the sports complex. As he is the person in charge of burial preparations for refugees who die in the camp, Dalawis keeps track of the deaths.

Dalawis said the local and national governments have already forgotten them.

Gamar Hassan, an evacuee from Mariki village, said a child died on February 7 and another the day after.

“Our government is preoccupied with sex scandals like Vhong Navarro. No one has ever started a real probe why people are dying inside evacuation centers,” Hassan said.

Arpa Husaying of the Philippine Council of Samah and Badjao said 2-year-old Pula Anas died of broncho pneumonia, while Jerry Julhari, a 10-month-old baby, expired Friday due to diarrhea.

“The Badjaos, when they beg from motorists, are not easily downed by illnesses, but when you control them in a place where they could hardly make a living, it’s like genocide,” Husaying told the Inquirer.

Husaying said the local and national governments should be made accountable for what is happening to the evacuees.

Mayor Maria Isabelle Climaco said there was a need to strengthen camp managers to monitor health and sanitation in the camps.

Climaco said a medical mission, called “Servicio Corazon,” would be conducted in the evacuation camps on Thursday (Feb 13).

“But one death is already alarming,” he said.