Elementary, High school will still have June opening of classes—DepEd 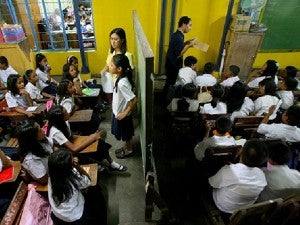 MANILA, Philippines – Elementary and secondary schools in the country will not follow some universities that have decided to shift their school calendars, a Department of Education (DepEd) official said Tuesday.

“The opening of classes will still be in June because we have not seen any compelling reason to make the shift from June to September,” said DepEd assistant Secretary Tonisito Umali in an interview over Inquirer Radio 990AM.

Umali said proponents of the transition of the school calendar argued that this would synchronize the schedule of Philippine schools with other Asian countries.

He said, however, that school calendars in the Asian region are varied, with only two to three countries starting their basic education classes in August or September.

He cited that in Malaysia, basic education classes start in January while Thailand has May and July for Indonesia.

He said in a study made by the DepEd that 13 out of 16 regions in the country expressed reservations over the proposed shift in the opening of classes to September instead of June.

Umali said recent data showed that typhoons did not only visit the country in June but also in other months,  citing Super Typhoon “Yolanda” (Haiyan) that devastated the Visayas in November.

The University of Santo Tomas announced Tuesday that it was shifting its opening of classes to July while the University of the Philippines (UP) system and the Ateneo de Manila University (ADMU) said it would start classes in August.

UST shifts school calendar for 204-2015, to start in July
Ateneo, UP change in academic year