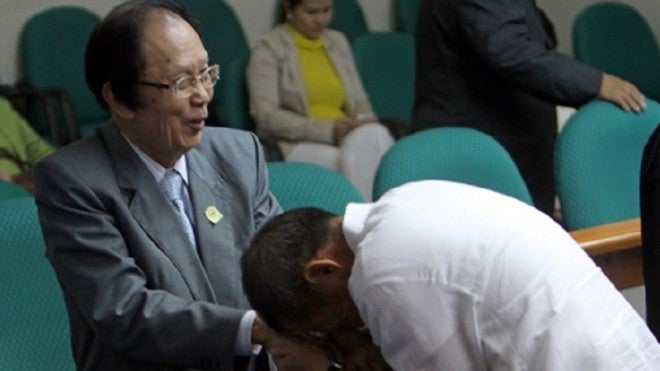 MANILA, Philippines—The Philippine flag and the colors of the Supreme Court are flying at half-staff to mourn the passing on Monday of retired Supreme Court Associate Justice Serafin Cuevas.

Cuevas, 85, died on Sunday night, but no details on the cause of his death were given to media.

His remains will lie in state at the Sanctuarium on Araneta Avenue in Quezon City starting at noon Tuesday. Cuevas will be buried in the family mausoleum.

Malacañang on Monday offered its condolences to the family of the late associate justice whom presidential spokesman Edwin Lacierda described as “an eminent jurist and a well-respected member of the legal community, as well as the academic community.”

“On behalf of the administration, we condole with the [family] of the late Justice Serafin Cuevas,” Lacierda said, adding that while “[Cuevas] had represented interests adverse to the government’s, we had always shown our respect [for] each other.”

But Lacierda could not say if President Aquino would attend Cuevas’ wake.

Cuevas was the lead defense counsel in the impeachment trial of then Chief Justice Renato Corona in 2012.

Aquino had publicly campaigned for Corona’s removal and eventually got his wish when senators voted to oust the chief magistrate after a four-month trial.

In a statement, Chief Justice Sereno also expressed her “sincerest condolences to the Cuevas family” and said that she knew Cuevas to be a “skillful lawyer” and a “brilliant teacher” at the University of the Philippines “where he finished his law degree and where he first made a mark in many law students’ hearts and minds.”

Sereno added: “He was also an erudite gentleman of the old school, speaking always with his words distinctly enunciated and always preferring the elegant language of the law to the often crude lingo of contemporary society.”

Corona also mourned Cuevas and said that theirs “was not an ordinary lawyer-client relationship.”

“[Ka Apin] was like a father to me,” Corona said in a separate statement.

When he was convicted by the Senate of betraying the public trust for not reporting his true income in his statement of assets, liabilities and net worth, Corona recalled that Cuevas had told him: “Sa Korte Suprema sa kabilang buhay, isa lamang ang nakaupong Maghuhusga, na Siyang may alam ng tunay na naganap na hindi ayon sa katarungan doon sa huwad na impeachment trial na iyon  (In the highest court in our next life, only One will sit in judgment, He who knows what really happened in contrast to the judgment meted out by that false impeachment trial).”

Even Cuevas’ main foe in the impeachment case against Corona had nothing but praise for his legal prowess and brilliance.

“I can truly say that he was the only reason that our task in the impeachment panel became difficult,” said Marikina Rep. Romero Quimbo, spokesman for the prosecution.

Quimbo lauded Cuevas’ mastery of legal procedure, his oratorical prowess, his uncommon sense of timing and his killer instinct. He described him as a “genuine legal giant” who was more impressive for his “humility outside the courtroom.”

Cuevas, a member of the Iglesia ni Cristo, was the high court’s 106th associate justice, having served the tribunal from June 1, 1984, to April 16, 1986.—With reports from Christian Esguerra and Leila Salaverria