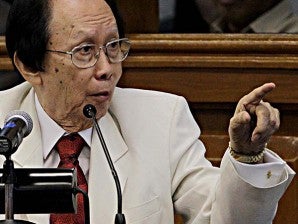 Cuevas is the Court’s 106th Associate Justice appointed by the late President Ferdinand Marcos. He served from June 1, 1984 to April 16, 1986.

He was the lead counsel of former chief justice Renato Corona in the latter’s impeachment trial in 2012.

Cuevas graduated from University of the Philippines College of Law in 1952. He started as a professor at the UP Law and the Far Eastern University Institute of Law, became an assistant prosecutor in Manila and eventually appointed as Judge to the Court of First Instance.

On July 1, 1998, Cuevas was appointed by then President Joseph Estrada as Secretary of the Department of Justice until January 31, 2000.

Cuevas was supposed to head the defense team for the impeachment trial of Ombudsman Merceditas Gutierrez but she resigned in 2011.

A year later, he led a team of lawyers to defend former Chief Justice Renato Corona in his impeachment trial.

Cuevas was born on June 25, 1928. He has four children.With a report from Kristine Angeli Sabillo