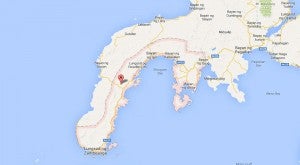 MANILA, Philippines – A teacher was killed when a sports utility vehicle (SUV) fell off a cliff in Zamboanga Sibugay Monday morning, reports said.

Media reported that the vehicle’s driver Abdullah de Guzman, a teacher, immediately died after the accident while 11 others were injured. Among the injured were school officials and students.

The Philippine National Police was quoted saying that the driver lost control of the vehicle along the national highway in Barangay (village) Bulaan in Zamboanga Sibugay.