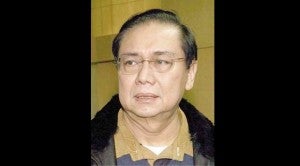 Justice Secretary Leila de Lima on Friday linked a former lawyer of Jose Miguel Arroyo, husband of former President Gloria Macapagal-Arroyo, to the scandal involving the misuse of P900 million in government royalties from the operation of the Malampaya gas field off Palawan province.

Speaking at a news conference, De Lima said lawyer Jesus “Jess” Santos had something to do with the scam, based on the testimony of Ruby Tuason, a former social secretary to former President Joseph Estrada, now mayor of Manila, and wife of Arroyo’s late cousin.

Tuason returned from the United States on Friday, offering to serve as state witness and tell all she knows about the P10-billion pork barrel and Malampaya Fund scams in exchange for immunity from prosecution.

De Lima said Tuason’s testimony would uncover the identity of the mysterious beneficiary of a portion of the misused funds.

About P243 million was allegedly withdrawn from the fund for Tuason’s unnamed principal.

“What Mrs. Tuason is confirming to us now is that deliveries of money were made at her house to his brother, now deceased. He was the one who was dealing with someone. But she said she also witnessed the delivery of the money and she mentioned a name, the one who was getting the money in their house and that can lead us to Attorney Jess Santos,” De Lima said.

“We all know who he (Santos) is. This is a very important development because, at first, we were still not sure who the undisclosed principal is. With her revelation, Mrs. Tuason is mentioning a name so we will pursue this,” De Lima said, adding that the Malampaya case was still being investigated by the Office of the Ombudsman.

“Finally we have an idea who the undisclosed principal is. We will build on this,” she added.

De Lima declined to elaborate on the leads provided by Tuason.

Santos adamantly denied that he served as bagman for the unnamed principal.

In a phone interview, Santos said he did not know and never met Tuason.

But he recalled meeting a certain “Ruby Tuason” who was peddling guns to him 20 years ago, although he said he was not sure if this was the same person as his accuser.

“The mother of FG is a Tuason, but I do not know them,” Santos said.

“So how can I know where her home is when I never knew who she is. I never even knew there was a Malampaya Fund, I only read about it in the newspapers,” he said.

Santos said he ceased being Arroyo’s lawyer four years ago, but admitted visiting him in his office at LTA Building in Makati City and also visiting former President Arroyo at Veterans Memorial Medical Center, where she is detained while under trial on electoral fraud and plunder charges.

He said he would take legal action after getting a copy of Tuason’s affidavit.

Santos was last in the news when he became a lawyer for former party-list Rep. Jovito Palparan who was charged with the abduction and murder of two University of the Philippines students.

In 2012, the Bureau of Internal Revenue filed charges of tax evasion against Santos over the salaries, allowances and bonuses he received when he was a member of the Government Service Insurance System board of trustees.

Ferdinand Topacio, current lawyer for Arroyo, accused De Lima of “extreme irresponsibility and lack of ethics, logic and common human decency” in “heavily insinuating” that Arroyo was involved in the Malampaya Fund scam.

“It is unlawyerly and unseemly of a public official sworn to impartially applying criminal laws,” Topacio said in a statement.

He said Tuason’s testimony, though “bare and untested,” was being used in the “continuing persecution” of the family of former President Arroyo by the Aquino administration.

“The fact that the unproven testimony of Tuason says she handed [money] to Attorney Santos—which he says he will strongly dispute as he does not know Tuason from Adam, and which he will prove—cannot by any stretch of logic or imagination be made to implicate Attorney Arroyo,” Topacio said.

“So what if Attorney Santos was the counsel of our client? Ms De Lima should know enough that there is no such creature as guilt by association or even guilt by lawyering,” he said.

De Lima, he said, should exercise more restraint, as her pronouncements are usually carried by the press.

“Allusions, innuendo, obloquy and asides have no place in a modern and civilized justice system, in which her department plays a not insignificant part,” Topacio said.

“There is the old saying she must need that goes: Better be quiet and be thought of as a fool than speak and remove all doubts,” he added.

Tuason’s lawyer, Dennis Manalo, said Tuason corroborated the evidence presented by the whistle-blowers in the pork barrel scam, including the names of the personages and the amount of money involved.

Manalo said Tuason would name more people aside from those already tagged in the investigation.

In her brief talk with Ombudsman Conchita Carpio Morales and De Lima after submitting her affidavit, Tuason said it was her troubled conscience that drove her to come forward and testify in the case.

She said it was a difficult decision, as some of the people involved were close to her.

Read Next
Jinggoy feels betrayed by close friend of Estradas
EDITORS' PICK
Duterte signs law giving rights, more protection to foundlings
Comelec won’t proclaim party-list groups yet
DOJ-led panel drops 29 cases of torture, EJKs
Luxe property: A way to build, preserve wealth
House energy committee chair Arroyo bats for cheap electricity
Honolulu Café is the cure for your Egg Tarts and Roastings cravings
MOST READ
Heart Evangelista gets a ‘no’ from Chiz Escudero after asking, ‘Do I deserve a bag?’
Congress canvassing of votes for president, VP to begin May 24
Pahiyas Festival back but tourists greeted with austere celebration
Duterte signs law providing protection to consumers
Don't miss out on the latest news and information.