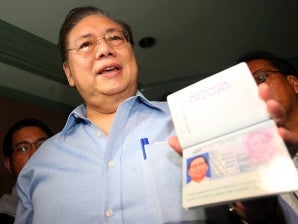 Justice Secretary Leila De Lima, reading from the affidavit of Ruby Tuason, said on Friday that she (Tuason) personally witnessed the delivery of kickbacks from the Malampaya funds to her sibling’s house.

(She [Tuason] said she had witnessed the delivery of kickbacks and she mentioned  a name who got the money from their house. That’s Jess Santos.)

Tuason is one of those facing a plunder complaint before the Office of the Ombudsman in connection with the Malampaya fund scam. She allegedly received P242.775 million received through a bank for still unidentified principal.

“This is a very important development because before we are not sure who is the undisclosed principal. But with this, Mrs. Tuason already mentioned a name, then we will pursue this,” De Lima said at a press conference.

Santos adamantly denied Friday he was the bagman for an unidentified principal to whom Tuason claims she was giving kickbacks for releases from the Malampaya fund.

In a telephone interview, Santos told the Inquirer that he did not know and never met Tuason.

Although he recalled having met a “Ruby Tuason” who was peddling him guns  20 years ago, he was not sure if this was the same person as her accuser.

Tuason’s family owns Arms Corporation of the Philippines (ARMsCor), a major supplier of firearms and ammunition.

Santos said he did not even know Tuason’s deceased  husband, Butch Tuason, a first cousin of his client Mike Arroyo.

“The mother of FG (first gentleman) is a Tuason but I do not know them,” said Santos. “So how can I know where her home is when I never knew who she is. I never even knew that there was a Malampaya fund;  I only read about it in the papers.”

Santos said he has stopped lawyering for Arroyo although he admitted visiting him at the latter’s LTA Building in Makati City and visiting the former president at the Veterans Memorial Medical Center.

He said he would take legal action after getting a copy of Tuason’s affidavit implicating him in the pork barrel scam.

While media have identified Tuason as an aide to former President Joseph Estrada, Tuason was more influential during the Arroyo administration due to her husband’s blood  ties to Malacañang.

Tuason’s lawyer, Dennis Manalo, said that his client corroborated the evidence provided by whistleblowers in the pork barrel scam, including the personalities and money involved. Manalo said Tuason would name more personalities aside from those already implicated.

In her brief talk with Ombudsman Conchita Carpio-Morales and Justice Secretary Leila de Lima shortly after submitting her affidavit, Tuason said it was her conscience that drove her to come forward and disclose everything she knew about the pork barrel scam. She said her decision to come forward and tell all was difficult because the people involved were close to her.

Read Next
COA uncovers P100 million in releases to questionable NGOs
EDITORS' PICK
Experience clearer calls nationwide with Smart VoLTE
Lorenzana orders review of protocol in handling slain rebels’ remains
PNP probing influx of marijuana in NCR, adjacent provinces
Duterte: May Bonifacio inspire all Filipinos amid COVID-19 pandemic
Arthaland’s property management arm utilizes Amazon Web Services to enhance delivery of service
Smart Prepaid encourages the youth to take their passions to the next level and ‘Live GIGA’
MOST READ
‘What is mine is hers,’ says Matteo on sharing finances with his Popstar Royalty wife
Lorenzana orders review of protocol in handling slain rebels’ remains
DOF to PITC: Return P1 billion in interest on ‘idle’ funds
Robredo to gov’t: Listen to ‘cautious’ Metro mayors on holiday season shift to MGCQ
Don't miss out on the latest news and information.