Cut off by floods, British village becomes an island 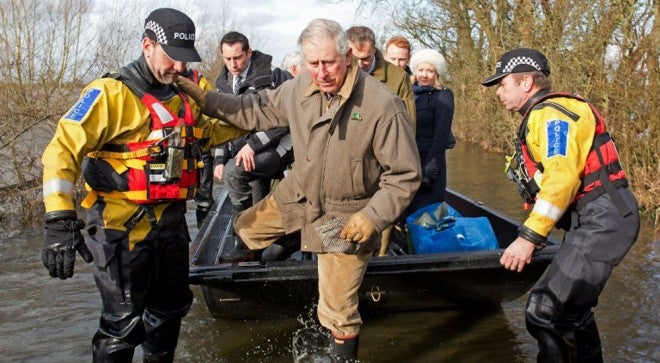 MUCHELNEY—It has been nearly five weeks since the tiny village of Muchelney, which means “great island” in Old English, became marooned by the floods caused by record rainfall in Britain.

The 150 inhabitants of the hamlet in the heart of the Somerset Levels, a marshy plain in southwest England, are becoming seasoned sailors as they take to the water to make contact with the outside world.

But in this historic area as in the rest of the country, criticism of the government’s emergency response is rising like the floodwaters.

Heir to the throne Prince Charles was visiting Muchelney on Tuesday to try to boost the spirits of a suffering community.

“Prince Charles can’t change anything, but people are pleased that he’s coming,” said Catherine Denny, a retired school teacher, as she shows off the frescoes at the village’s 10th-century abbey.

The area is no stranger to flood waters, which once thwarted English Civil War leader Oliver Cromwell’s attempts to destroy its churches in the 17th century, explained Denny.

“It does happen very often, but this time it’s been very long,” she added.

Some 11,500 hectares (28,500 acres) of the Somerset Levels are under water following the wettest January in southern England since 1910. Several other nearby villages are in semi-isolation, barricaded by sandbags for fear of rising water levels.

Another 180 houses were flooded last weekend and emergency teams are on standby with more rain expected on Wednesday.

With no obvious solution available, British Prime Minister David Cameron’s government faces rising anger from flood victims who say it directs too many resources to urban problems at the expense of the rural population.

Since then, all access roads have been under water—up to two meters (six feet) in places—and the only way in and out is by boat.

Boats piloted by police or rescue workers follow the path of the roads beneath the water. Beside one road, a gray car hastily abandoned by its owner lies submerged, a testament to the flood’s destructive power.

Everyday tasks such as going to work, dropping the children at school and food shopping suddenly became arduous chores requiring a life-jacket.

“It takes two and half hours to get a pint of milk,” explained local resident Nigel Smith.

With no relief in sight, Catherine Denny expects villagers to be holed up in their private fort for “long weeks” to come.

“Everybody manages,” she said. “There is a farm shop where you can get vegetables, bread and some meat, people can get out on the boat and bring back some food.”

“We had a flood party in the church on Sunday, where people brought something,” she added. “It brings people together.”

But the fate of Muchelney could be the shape of things to come for rural Britain.

The head of Britain’s Environment Agency, Chris Smith, warned this week that the country may have to choose between whether to protect its towns or its countryside from flooding in the future.

He said that “building dams is very expensive.”

Cameron has promised £4 million ($6.5 million, 4.8 million euros) to dredge river beds, but most experts believe it will not help.

“Retreat is the only sensible policy, if we fight nature, we will lose in the end,” Colin Thorne, professor of physical geography at Nottingham University and a leading flood expert, recently told the Daily Telegraph newspaper.

But Muchelney resident Robin Board said it was a “disgusting” way to treat the countryside.

“I grew up here, there was always flooding but never as deep and as long,” he said.

“They haven’t dredged for 20 years. They spent £20 million on a bird sanctuary, but they haven’t the money to dredge.

“They prefer birds to humans. Everybody’s angry about it.”

But his fellow villager Smith showed a more British stiff upper lip about the situation.

“Those who have been flooded are pretty fed up, but those who haven’t are mostly bored,” he said.—Jacques Klopp