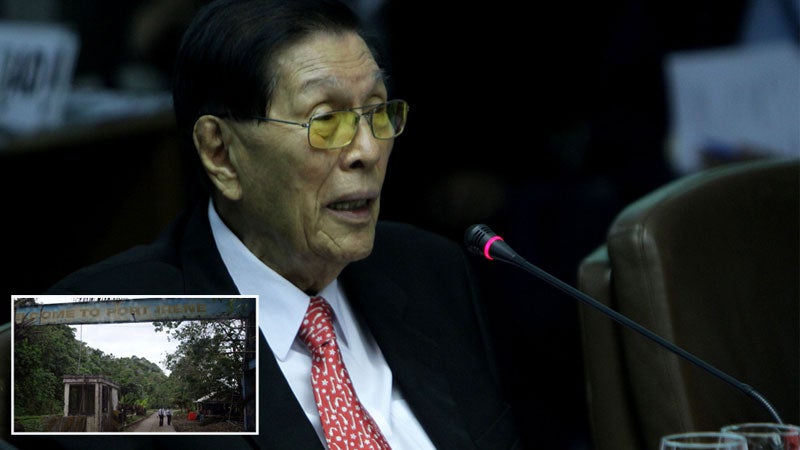 MANILA, Philippines—Let them investigate, including diving in 15-meter-deep water to examine the breakwater in Port Irene, Cagayan province, they won’t find anything, Sen. Juan Ponce Enrile said on Tuesday after Sen. Miriam Defensor-Santiago asked the Department of Justice (DOJ) to look into his connection with the company that built the P5.101-billion project.

Santiago also asked De Lima to investigate an affiliate company as another business tied to Enrile’s financial interests, as its board of directors included his former chief of staff, lawyer Jessica Lucila Reyes, and Reyes’ mother, Maria O. Cooper.

“I humbly submit that it would certainly be productive to investigate the use of the names of his chief of staff—Atty. Jessica Lucila “Gigi” Reyes—and her family in the disbursement of some P5.101 billion in public funds,” Santiago said in her letter to De Lima dated Feb. 4.

“Enrile was able to insert this humongous amount in the budget for the Cagayan Freeport for the last five years. It appears that Enrile used their names to surreptitiously morph the free port into the main vehicle for smuggling and other illicit operations,” Santiago added.

Also on Santiago’s request, the DOJ is already looking into her allegations raised in a privilege speech about Enrile’s alleged involvement in corruption, smuggling and gambling, among other matters.

Santiago’s letter on Tuesday asked De Lima to include Enrile’s alleged connection to the two construction companies that both have a certain Alice Eduardo as their president.

“They can conduct all investigations. [I have] no financial dealings with Alice Eduardo,” Enrile said when asked about Santiago’s latest move against him.

“I’m sure she (Eduardo) won contracts in fair and legitimate bidding.  Let them check the projects. Dive in 50-foot-deep water to check the breakwater,” he said.

He said he knew Eduardo only “socially” and was in no way related to her.

Enrile, however, vouched for Eduardo as a reputable businesswoman who introduced the “Jack Stone” system of building breakwater.

Is Eduardo fronting for him with her construction companies?

“They are free to check. I never received a single centavo from her,” Enrile replied.

As for Reyes and her brother and mother being on the board of Sta. Fe Builders, Enrile said, “You better ask the people concerned.”

In a later exchange with reporters, Enrile said about Reyes and her family’s being on the Sta. Fe board, “So what if they are members of the board? What’s that about?”

“Here, certain details betray Enrile’s hand. The Sta. Fe Builders board of directors includes Gigi’s family. Her brother, Neal Jose O. Gonzales, is board chair and her mother, Maria O. Cooper, is a board member and one of the directors,” Santiago said.

“That is Enrile’s thumbprint right there. The family of his chief of staff are board members of Sta. Fe Builders, which in turn is listed among the directors and officers of a Reyes family corporation, MGNP. Suspiciously, Sta. Fe Builders was removed only two months later from the list of board directors,” she added.

Santiago said it appeared that Enrile had used the names of Reyes and her family “to mask his immense personal financial interests, not only in Sta. Fe Builders, but also in Sta. Elena Construction.”

“The latter apparently served as conduit for the P5.101 billion that the government spent for the breakwater at Port Irene, basically Enrile’s brainchild when he served as representative,” Santiago said.

Santiago said it also appeared that Eduardo, “all the while pursuing her financial relationship with Enrile,” ran the construction company that built the foundation works for huge projects such as the Pagcor Entertainment City, North Luzon Expressway, SM projects including the Mall of Asia, four power plants, several traffic interchanges, and several bridge and flood-control projects.

Santiago added that only recently, “Eduardo reportedly became one of the Filipino partners of Japanese gaming tycoon Kazuo Okada.”

“If Enrile is inexplicably linked to Eduardo, the logical question follows: Is Eduardo a front woman for Enrile’s business interests? If not, why did Enrile entrust to her a project in his home base, the Cagayan Freeport, with a budget costing the government P5.101 billion?” Santiago said.

“Based on these facts, I respectfully request that the DOJ investigating panel pursue this angle,” Santiago said in her letter to De Lima.

Last December, Santiago disclosed that the Cagayan Economic Zone Authority (Ceza), which operates the free port in Enrile’s home province, received appropriations of P5.1 billion from 2008 to 2013 even “without any significant contribution to the economy or the national treasury.”

Santiago asked Budget Secretary Florencio Abad to veto the P800-million allocation to Ceza in the 2014 budget that she considered a “pork barrel” of Enrile, similar to his allocation in the Priority Development Assistance Fund (PDAF), which the Supreme Court struck down last year as unconstitutional.

The Senate committee on finance slashed this year’s budget of Ceza to just 10 percent of the original proposal because members of the panel believed the government was getting too little from its investments in the free port, which was Enrile’s project when he was serving in the House of Representatives.

According to documents obtained by the Inquirer, the Senate finance committee approved a P90.886-million budget for Ceza in the 2014 budget, P800 million less than its P890.886 million budget approved by the House.

Osmeña, however, said the senators were compelled to restore Ceza’s budget to P890.886 million during the plenary debate on the proposed 2014 General Appropriations Act (GAA) because the money was meant for Phase IV-B of the Port Irene breakwater project that was approved as part of the medium-term economic development program by the National Economic and Development Authority-Investment Coordinating Committee (Neda-ICC) more than a decade ago.

Under the GAA guidelines, Ceza’s capital outlay this year would be released subject to the approval of the Neda-ICC.

This is the last tranche of the P5.1 billion, 1,000-sqm breakwater project at Port Irene, which was built during the administration of President Ferdinand Marcos, who named it after his youngest daughter.—With a report from Gil C. Cabacungan