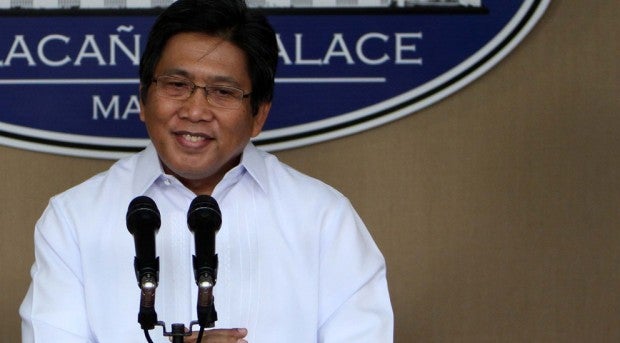 MANILA, Philippines—Admitting that smuggling is “no small-time problem,” Malacañang on Tuesday outlined the government’s efforts to deal with it through “systemic reforms.”

The Bureau of Customs (BOC) is the target of those reforms, after previous corrective measures failed to stop the agency’s officials and employees from abetting big-time traders in smuggling in exchange for billions of pesos in bribe.

Malacañang and the Bureau of Internal Revenue (BIR) announced fresh attempts to stem revenue losses through smuggling as Sen. Cynthia Villar, chief of the Senate agriculture committee investigating rice smuggling through the ports, called on the Department of Justice to file criminal charges against Davidson Bangayan, alias David Tan, for rice smuggling.

On Monday, Bangayan told Villar’s committee that it was common practice for rice import permits to be sold to traders.

“At least, we were able to connect him to rice trading and definitely—I’m not a lawyer—but my opinion is that if you use other people to import for your benefit, that is illegal,” Villar told reporters.

In Malacañang, Communications Secretary Herminio Coloma said it was not enough to revamp the BOC, which President Aquino had already done by appointing former Finance Undersecretary John Philip Sevilla to the top post at the agency.

“It’s not enough. We need systemic reforms,” Coloma said in a press conference, referring to the six “reform measures” now being implemented at the customs bureau.

The measures include the establishment of a “centralized single reference for valuation information, a single dispute resolution process for valuation, digitization of every single formal transaction, review of the monitoring of customs bonded warehouses, revamp of the importer accreditation process, and intensified monitoring of sensitive imports.”

“One simplified way of looking at this is to automate and to transition to a purely electronic system where there is almost no human intervention,” Coloma said.

The Palace said it appreciated the report of the Global Financial Integrity (GFI), which estimated at $410.5 billion the total amount of “illicit funds” that flowed through the Philippines from 1960 to 2011.

Of the amount, $277.6 billion allegedly came through underreporting merchandise shipped into the country, according to economist Brian LeBlanc, one of the authors of the GFI report on illicit money inflows to the Philippines.

“Customs corruption is a huge issue in the Philippines,” he added.

Corruption at the BOC has cost the government at least $23 billion in forgone tax revenues since 1990, the GFI said in its report titled “Illicit Financial Flows to and from the Philippines: A Study in Dynamic Situation, 1960-2011.”

Reacting to the report, Coloma said the administration “assumed office without any illusion that this is a small-time problem.”

“We realized that this is a systemic and deeply rooted problem that is why we are prepared to address it strategically and to adopt long-term solutions,” he said.

Coloma stressed, however, that the Aquino administration “accounts for only three, or one-seventeenth of the 51 years,” covered by the GFI study.

“This is an administration that from Day One has committed itself to the proposition that good governance equals good economics and has made the campaign against corruption the cornerstone of its good governance program,” he added.

“So we appreciate studies like this that shed light on the nature, extent and scope of corruption in the hope that this will give us valuable insights that will aid the government in further strengthening institutional reforms that will ensure that corruption will be minimized, if not totally eradicated,” he said.

Also reacting to the GFI report, BIR Commissioner Kim Henares told a news conference that the administration would tighten the channels traditionally used by smugglers to avoid paying customs duties.

Henares said the Department of Finance would require the itemization of merchandise.

“Imports can no longer be lumped [together] in a single figure [in their declaration forms],” Henares said.

She explained that highly dutiable goods are lumped together and misdeclared under misleading descriptions to avoid high customs tariffs.

Henares said there were standing instructions for itemization of imports, but the new finance department order would give the system more teeth.

She said the BOC would be asked to reevaluate preaudit and postaudit procedures of importers to better determine which ones were faithfully complying with regulations.

“We will also come out with a revenue memorandum order and a customs order for accreditation [of brokers who can deal with the customs bureau] as to what the criteria are, who will be accredited and how you can maintain accreditation status,” Henares said.

In the Palace, Coloma said the government had filed 157 cases of tax evasion since 2010, an average of one case a week.

He said the BOC had “taken steps to promote transparency and openness, simplified transactions, and adopted a systemic approach to plug loopholes and minimize opportunities for graft and corruption.”

Still, smugglers continue to get away because of entrenched corruption, one of the reasons why the BOC misses its revenue-collection goals.

In January, the bureau failed to meet its revenue target of P31.3 billion, with total collections amounting to P29.36 billion, a shortfall of P1.94 billion.

According to the BOC’s financial service office, the collections for January were 6.2 percent off the bureau’s goal for the 21-day trading period in that month.

According to the financial service office report, eight of the BOC’s 17 collection district across the country missed their revenue targets in January.

In 2013, the BOC collected a little more than P300 billion, which was more than P35 billion short of its annual target of P340 billion.

In the Senate, Villar said the agriculture committee recommended the filing of charges against the smugglers way back in February last year.

She said the Senate legal department was preparing perjury charges against Bangayan for his repeated denial during the hearings that he was the alleged rice smuggler David Tan.

Sen. Juan Ponce Enrile moved to cite Bangayan in contempt for lying to the committee by denying he was David Tan when evidence held by the committee and testimony from witnesses pointed to him and Tan as the same person.—With reports from Daxim Lucas, Norman Bordadora and Jerry E. Esplanada

Palace: We need systemic reforms, not just revamp in BOC