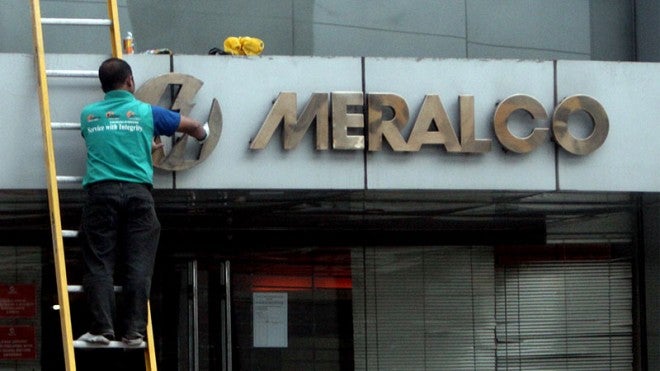 Manila Electric Co. on Tuesday told the Supreme Court that the continued suspension of its power rate hike would disrupt the power supply chain and force it to ration power that would result in brownouts. INQUIRER FILE PHOTO

MANILA, Philippines—Manila Electric Co. (Meralco) on Tuesday told the Supreme Court that the continued suspension of its power rate hike would disrupt the power supply chain and force it to ration power that would result in brownouts.

At the continuation of the oral arguments on petitions to stop its rate increase, Meralco said it owed power-generating companies P18 billion since the high tribunal froze the generation charge at P5.67 per kilowatt-hour because of the 60-day temporary restraining order (TRO) that the court issued last Dec. 23.

But this statement of Meralco lawyer Victor Lazatin did not sit well with Associate Justice Marvic Leonen.

Leonen countered that what the high court had temporarily stopped was Meralco’s Dec. 5, 2013, request for a rate hike application of P4.15/kWh to be staggered for three months and the Energy Regulatory Commission (ERC) approval of this request on Dec. 9.

“The court is not insensitive to the time element,” Sereno said.

Leonen said that based on the matters raised by Meralco in its Dec. 5 letter, the TRO did not cover the (increases in) December, January and March.

“It escapes us that you read (the TRO) as freezing the P5.67/kWh generation charge. It is not there. You’re using it, that our decision will affect the power sector,” Leonen said.

Lazatin said that Meralco had intended to clarify what the TRO meant last December but he noted that the high court had already gone on recess. He said he would file a motion seeking to clarify the TRO.

It was the turn of Meralco to defend itself from the petitions seeking to permanently stop the P4.15/kWh rate increase that the ERC had approved for collection in December, February and March.

Meralco has 5.3 million customers in its franchise area that covers 31 cities and 80 municipalities in Metro Manila, the entire provinces of Bulacan, Rizal and Cavite; and parts of the provinces of Laguna, Quezon, Batangas and Pampanga.

The franchise area, home to 24.7 million people, accounts for about 50 percent of the country’s gross domestic product.

Lazatin said the petitioners—Bayan Muna lawmakers and Nasecore—were barking up the wrong tree as what they were questioning was the increased “pass through” generation charges of the generation companies (gencos) that resulted from the shutdowns of the Malampaya facility and several power plants.

“Petitioners have no issue with Meralco’s distribution charge, which has not changed. And yet, Meralco finds itself in the vortex of the controversy, which should have been properly a case between the petitioners and the gencos,” Lazatin said

He insisted that Meralco was a distributing utility and its share in the electricity bill had to do with the distribution charge.

Lazatin urged the high court to lift its TRO, which ends on Feb. 23, and for it to deny the petitioners’ appeal for a writ of preliminary injunction.

The Meralco lawyer warned that the continued TRO or a writ of preliminary injunction would disrupt the power supply chain.

Lazatin initially said the power distribution firm had owed gencos some P11 billion to P12 billion but this ballooned to P18 billion because of high power rates at the Wholesale Electricity Spot Market (WESM). He said the P18-billion collection deficiency covered the December and January billing.

“As the unpaid fuel suppliers will stop delivering fuel to the gencos, the unpaid gencos will stop generating and delivering power to Meralco, and Meralco will have insufficient power and will have to ration power resulting in blackouts,” Lazatin said.

He said the TRO saw Meralco freezing the generation charge at P5.67/kWh.

While power supply is sufficient “for now,” the demand will increase in the summer months, peaking at 17 percent in April, according to the Meralco lawyer.

Lazatin said the economy would suffer because of rotating brownouts.

“If at all, all gencos and other beneficiaries should likewise be enjoined from collecting these pass through charges from Meralco,” Lazatin said.

Meralco said the rate increase was due to the shutdown of the Malampaya gas pipeline for maintenance from Nov. 11 to Dec. 10.

A number of power-generation plants also shut down during this time, creating a 45-percent shortfall in the average 6,000 megawatts that Meralco supplies to customers.

Meralco said the shortfall forced it to buy a more expensive supply from WESM and to pass on the cost to its customers.

The shutdown of the pipeline also forced plants that use the cheaper natural gas from Malampaya and supply power to Meralco to use more expensive fuel.

Lazatin insisted that Meralco “played by the book” but added that there were some regulations in the power industry that the company would have “wished” to be deleted, among them the “must-offer” rule for all gencos that required them to offer prices for electricity they were selling even if they already have a supply agreement with distribution utilities, such as Meralco.

He also denounced gencos, which he said made offers to supply electricity but did not do so, and those that made an offer but not to the maximum level as Meralco grappled with the looming shortfall due to the simultaneous shutdown of power plants.

The lawyer also blamed the Commission on Elections’ request for the power plants to postpone their scheduled maintenance shutdowns from October last year, when the barangay (village) polls were held, to November. He said it was National Grid Corp. of the Philippines that approved the simultaneous shutdowns.

He said Meralco also made “private efforts” to stop the increase by asking Philippine Electricity Market Corp. (PEMC), which operates WESM, for an “administrative” or controlled price of electricity after learning about the simultaneous shutdowns.

Justice Antonio Carpio’s interpellation of Lazatin focused on the power supply agreement (PSA) between Meralco and one of its suppliers, Therma Mobile Inc. (TMO).

Since the PSA gave Meralco the power to dictate to TMO what prices to offer, Carpio said it appeared that Meralco was acting both as the buyer and the seller.

The petitioners claimed there was collusion because, in accordance with WESM rules, the P62 per kWh cap price offered by TMO also became the price offer by all other power suppliers when Meralco was buying electricity for its 10-percent shortfall.

Carpio said it appeared that the price of P62 “was established by one party,” referring to Meralco.

Lazatin cited “business strategy” behind the P62 price, saying TMO offered the highest price in the hope that it would not be dispatched. TMO also had no choice but to make an offer because it was required by WESM rules.

The lawyer said that because other power suppliers did not make good their offers or made incomplete offers, Meralco ended up buying at the P62 price that was dictated by TMO.

Carpio asked if the clearing price of P62 per kWh was the “actual cost” of the electricity which Meralco was obligated under the Electric Power Industry Reform Act.

Lazatin said Meralco was only a “price-taker” and had no say about how the price of electricity will be set by the market.

He said that the month of December registered a high demand for electricity and that Meralco should have charged P9-10 per kWh.

“Meralco erred on the basis of caution,” Lazatin said, when asked whether Meralco misread the TRO as claimed by Leonen.

Asked whether Meralco would make the adjustments, Lazatin said he would have to consult his client first.

“It’s a business decision. My client will make the decision,” he said.

While Meralco was seeking the lifting of the TRO, Bagong Alyansang Makabayan (Bayan) called on the Supreme Court to extend it.

“We hope that the TRO will be extended indefinitely as we wait the final ruling of the court, which we believe should be in favor of the consumers and not the giant power monopolies,” Bayan secretary general Renato Reyes Jr. said in a statement.—With a report from Maricar B. Brizuela