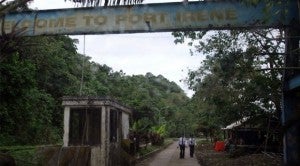 Port Irene in Cagayan Freeport Sta. Ana, Cagayan. A big-time contractor, who has close personal and business ties to the former chief of staff of Sen. Juan Ponce Enrile and her family, cornered the bulk of P5 billion in state largesse given to the Cagayan Freeport in the last five years. INQUIRER FILE PHOTO

MANILA, Philippines –  Senate Minority Leader Juan Ponce-Enrile on Tuesday admitted knowing the contractor that had allegedly cornered the bulk of the P5.101-billion funds  for Cagayan Freeport, but denied any financial dealings with her or pocketing a single centavo from the project.

“I have no financial dealings with Ms. Eduardo. I’m sure that she won all her contracts on her merits, in a fair and legitimate bidding,”  Enrile said, referring to  Alice Eduardo, president  and  chief executive officer of  Sta. Elena Construction, which reportedly bagged  the contract for  the construction of a breakwater in the province.

“Now, if they want to check the quality of the work in that port, they can go there and dive in a 50-feet deep water to check the breakwater,” he said.

The subject of the controversy is the Irene Port, which reportedly consumed the P5.101 billion budget for the construction of the breakwater.

Enrile though admitted that he met Eduardo “socially” four or five times.

Asked about reports that Eduardo served as his “front,” Enrile said: “They are free to check. I have never received any single cent from her.”

Reports had it that Eduardo is also the president of Sta. Fe Builders that has linked to the family of Enrile’s former  chief of staff,  Atty. Jessica Lucilla “Gigi” Reyes.

When asked about Reyes family’s possible involvement in the project, Enrile said: “You better ask the  people concerned.”

But he strongly denied any speculations that his office might have been used by anyone without  his knowledge.

“No way. My office never influence anybody. You can ask the entire bureaucracy,” said the senator.

Enrile pointed out that the project was not  his project  but  the project of the government.

“That’s all audited. That’s all approved by NEDA. That’s a project of the government, not my project. I’m just a senator,” he said.