Abad tells SC: DAP not used to give incentives to senators | Inquirer News

Abad tells SC: DAP not used to give incentives to senators 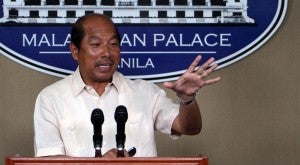 Abad told the high court that the DAP was not used to ensure Corona’s conviction; he stressed that the funds were not given to the senators, instead, the senators were asked to recommend priority projects/programs subject to the President’s approval.

“DAP had absolutely no relation to impeachment of former Chief Justice Corona…Sometimes, your honor, we are not correctly quoted in the reports. Those [DAP] releases were not releases given to the senators. What happened there was that the senators made recommendations to the President to augment certain items that are deficient in the budgets of certain appropriations for certain projects.

Solicitor General to argue for DAP before SC on Tuesday