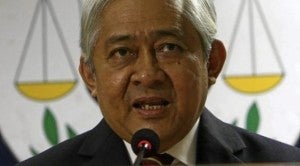 MANILA, Philippines—Government lawyers on Tuesday said the government does not need the disbursement acceleration program anymore after the P149 billion used to pump prime the economy for three years has achieved its purpose.

Solicitor-General Francis Jardeleza told reporters in an ambush interview at the Supreme Court that the government already stopped using DAP in the middle of 2013.

“We do not need it anymore and hope we won’t need it again,” Jardeleza said.

Budget Secretary Florencio Abad echoed Jardeleza’s statement, saying “may I inform the Court that because the DAP has already fully served its purpose, the administration’s Economic Managers have recommended its termination to the President.”

During his presentation before the Supreme Court, Abad said that when they introduced DAP in October 2011, spending quarter of that year has surged by 32.5 percent year-on-year.

“This pulled spending up to a full-year growth of 2.3 precent,” Abad said.

Abad further noted that disbursements have further strengthened the economy, growing by 11.8 percent year-on-year as of end September 2013. He said infrastructure spending alone has recovered from a 29-percent contraction in 2011 to a 34-percent growth as of end-September 2013.

“The increased spending level contributed significantly to our country’s stellar GDP growth which had averaged 7.4 percent in the first three quarters of 2013,” he added.

DAP, according to Jardeleza, is simply a procedure adopted by the Department of Budget and Management to use savings to augment other budgetary items in the annual General Appropriations Act (GAA).

“The use of savings for augmentation is authorized by the Constitution and existing laws and falls within the authority of the President,” Jardeleza said, citing prior decisions by the high court in the cases of Demetria v. Alba and Gonzales v. Macaraig characterizing this “authority to augment as one that affords the heads of the different branches of government ‘considerable flexibility’ in the use of public funds and resources.’

Jardeleza said “the systemic issues that slowed down public spending have been resolved, and line agencies now have normal levels of budget utilization.”

“This is indicated by the diminishing use of DAP, which lapsed into complete disuse in 2013 and became functus officio (no longer existing). The President no longer has any use for DAP in 2014,” Jardeleza said telling the high court that the nine petitions assailing DAP’s legality has been rendered moot and academic.