DPWH: No more bunkhouses; victims to get housing assistance 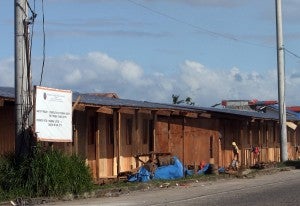 MANILA, Philippines — Instead of building more bunkhouses for the survivors of Super Typhoon “Yolanda” in Eastern Visayas, the Department of Public Works and Highways will provide them with construction materials under its Permanent Shelter Program for typhoon-ravaged places.

Singson said in a radio interview that priority would be given to families living in coastal areas of Leyte and Eastern Samar provinces because “they will be resettled in areas which are much safer than the coastal communities where they used to live.”

“It would be good if a cash-for-work component is included in the reconstruction of typhoon-damaged homes,” he added.

He welcomed the “participation of donors who are willing to provide financial assistance” under the project.

Meanwhile, Singson disclosed that the DPWH has a “new design” for disaster-resilient school buildings which would be presented to the Department of Education shortly.

In a related development, Rolando Asis, director of the DPWH office in Eastern Visayas, reported that 30 more bunkhouses were completed last week by private contractors, bringing to 165 the total number of temporary shelters put up for typhoon survivors.

“Work on the remaining 57 temporary shelters is ongoing. These bunkhouses are actually substantially completed,” he told the Inquirer.

Earlier, he expressed confidence the construction of the remaining bunkhouses would be finished by the end of January. The government had planned to put up 222 bunkhouses in Leyte and Eastern Samar.

According to Asis, construction of the bunkhouses had been hampered by continuous heavy rain.

Only 122 temporary shelters were put up before the Christmas break. Two of them, both in Barangay (village) Candahug in Palo, were turned over to typhoon victims by President Benigno Aquino during his visit to the area on December 22.

As of January 27, only 58 of the 165 completed bunkhouses have been occupied. The Department of Social Services and Development is tasked to identify their recipients.

In Tacloban City alone, there are a little over 1,000 families who are still living in different tent cities and evacuation centers, according to the DPWH.