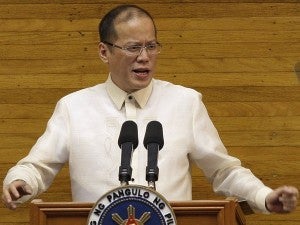 DAP, which was created to rechannel the savings of various government agencies to projects intended to pump-prime the economy, provided an additional P50 million in pork barrel for each senator in the aftermath of the impeachment of then Chief Justice Renato Corona last year.

Aquino is set to deliver a televised speech from the Palace between 6:30 p.m. and 7:30 p.m. “to discuss current issues.”

“It’s not always the devil that is in the details, the good can be found, too, if we will just bother to check,” said the statement posted on the website of the Department of Budget and Management (http://www.gov.ph/).

The statement that originated from the Technical Education and Skills Development Authority claimed that skills training programs funded by the “controversial” DAP had “yielded high employment rate, putting to work” more than 90,000 graduates of various courses managed by Tesda.

The statement quoted Tesda Secretary General Joel Villanueva as saying that DAP “yielded good results for us and the thousands of graduates that are now gainfully employed.”

A total of P1.1 billion was released to Tesda in October 2011 through DAP, and this “produced close to 150,000 graduates” of livelihood courses, the statement said.

“And how this fund was utilized was backed by records and an authentic list of beneficiaries,” it said.

“The Training for Work Scholarship program is one of our existing programs funded under the General Appropriations Act. Based on our data, six out of 10 graduates who availed [themselves] of the scholarship got employed within six months to one year after training,” Villanueva said.

In the IT-BPO sector, 75,479 completed the training from the 75,682 individuals who enrolled for it, resulting in a 70.7 percent employment rate for those programs implemented in partnership with the Business Processing Association of the Philippines (BPAP).

BPAP has provided Tesda with the list of the names of the employed graduates for this sector.

To maximize resources and ensure high employment rate of graduates, Villanueva said Tesda partnered with BPAP for the joint management of the implementation of the I-TWSP.

These associations, in turn, engaged Tesda-accredited companies and training institutions with Tesda-registered programs to undertake the training of qualified near-hires.

An additional P18 million was allocated for the BPAP for the implementation of the Training Methodology Plus (TM Plus) program for 900 IT-BPO trainers.

In the semiconductor sector, one of the industry partners of Tesda is the Semiconductor and Electronics Industries in the Philippines, which produced 2,404 graduates, of which 2,044 or 85 percent are already employed.