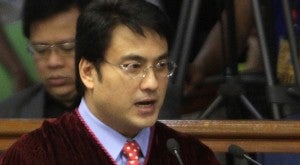 When the Senate voted to oust Chief Justice Renato Corona in May 2012, Sen. Ramon “Bong” Revilla Jr. took the floor and rendered a guilty verdict, giving the crucial 16th vote to remove Corona.

The votes of at least 16 out of the 23 senators were needed to oust the Chief Justice. The final tally was 20-3 for the ouster of Corona for dishonesty in submitting his statements of assets, liabilities and net worth (SALNs).

“In the end, I arrived with a conclusion that, through his own direct admission, the Chief Justice failed to properly disclose all of his assets in his SALN. This, therefore, has necessary consequences that attach to the position he holds in trust,” Revilla said in explaining his vote.

In December 2004, the actor-turned-senator took the floor to propose the death penalty for illegal loggers after seeing for himself the destruction caused by landslides and floods in Quezon province brought by Typhoon “Yoyong.”

In a privilege speech titled “A Doctor’s Perversity” in May 2009, Revilla accused Dr. Hayden Kho of being behind a sex video with a “prominent personality” that was “obviously taken without [her] consent.” Revilla called Kho a “pervert of the highest order” and a “predator.” The speech came after sex videos involving Kho and other women were uploaded on the Internet.—Inquirer Research

Palace denies Revilla claim he was influenced to impeach Corona