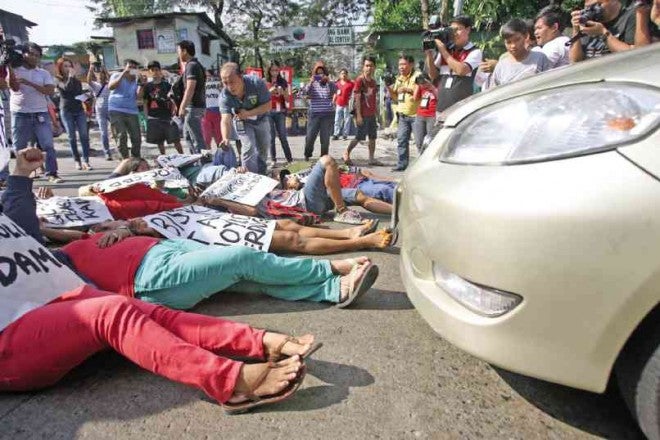 Protesters and stall owners stage a “lie-in” in front of the gates of the Manila Seedling Bank compound at the corner of Edsa and Quezon Avenue in Quezon City to protest the demolition of stalls inside the seven-hectare compound. MARIANNE BERMUDEZ

The Quezon City government on Monday started demolishing vendors’ stalls at the Manila Seedling Bank compound despite allegations that its takeover of the seven-hectare compound at the corner of Edsa and Quezon Avenue was illegal.

“There are 30 or more stalls left to be torn down so our operations will continue,” Elmo San Diego, head of the Department of Public Order and Safety at city hall, told the Inquirer.

Nine stalls were demolished starting at 9 a.m. Monday after their owners received notices. This prompted several tenants to take down their own stalls themselves.

However, one of them, Waling-Waling Orchids owned by a certain Fuentespina, was able to get a temporary restraining order that would expire on Jan. 22.

Dr. Victor Endriga, senior adviser to Mayor Herbert Bautista, said that city hall gave the go-signal for the demolition after the tenants ignored a deadline for them to leave the compound.

The Manila Seedling Bank Foundation (MSBF), which runs the compound, has repeatedly maintained that the city government’s takeover of the property was illegal since it was ordered earlier by a court to give the stall owners permits to operate.

MSBF president Lucio Bertol, who called the demolition “Gestapo-like,” complained that city hall had chosen to ignore the court order. He also criticized it for closing the compound during the demolition to prevent outsiders and media from coming in.

Bertol said other stall owners had expressed their intention to apply for a TRO as well.

Endriga, however, said that the MSBF “no longer had any legal personality with the Securities and Exchange Commission” as its certificate of registration was revoked on Feb. 21, 2002, for noncompliance with reportorial requirements, particularly financial statements from 1996 to 2003.

For his part, San Diego said the demolitions were part of preparations for the Central Business District.

“After demolishing the stalls, the engineering department will put up fences. A communications tower and a convention center will be erected there,” he added.

Last December, the city government shut down the compound for the foundation’s failure to pay P57.208 million in real property taxes from 2001 to 2011.

The MSBF, however, insisted that the property was owned by the National Housing Authority, making it tax-exempt. The foundation began occupying the property in 1977 by virtue of Proclamation No. 1670.

In June last year, Quezon City Regional Trial Court Branch 96 Judge Afable Cajigal ordered city hall to “permanently desist from enforcing or implementing the Quezon City Zoning Ordinance” on the property, under which it would become part of the business district.