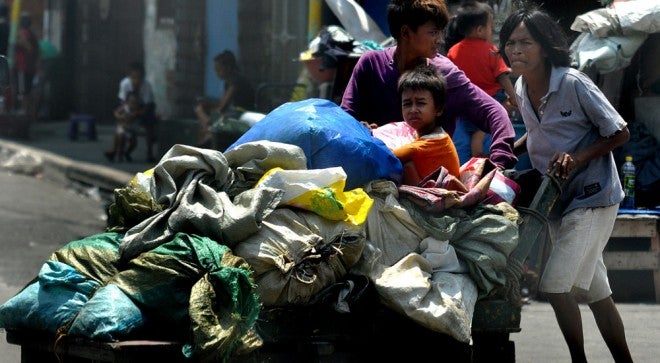 Despite the country’s high economic growth, most Filipinos considered their quality of life, both at the national and personal levels, to have worsened in the previous 12 months, results of a Pulse Asia survey last December showed.

They also expected the situation to remain the same for the whole of 2014.

Pulse Asia interviewed 1,200 adults all over the country from Dec. 8 to 15. The survey has a margin of error of plus-or-minus 3 percentage points at the 95-percent confidence level.

Back then, 48 percent of Filipinos saw no change in the national quality of life in the previous 12 months. Thirty percent said it deteriorated and 23 percent noted an improvement.

Except for Metro Manila where 54 percent said there was a lack of movement in the situation of most Filipinos, the sentiment that the national quality of life deteriorated was shared by “near to sizeable majorities” across geographic areas (53 percent to 63 percent) and socioeconomic classes (48 percent to 58 percent).

Among the developments before and during the survey were the rehabilitation efforts in areas devastated by the Super Typhoon Yolanda, the approval of the P2.26-trillion national budget by the bicameral conference committee, and the investigation by the Department of Justice and Department of Energy of the simultaneous shutdowns of power plants that resulted in Manila Electric Co.’s petition for a three-phased hike in its rates.

Forty-three percent of Filipinos expected no change in the quality of life of their countrymen in the next 12 months, down 9 points from 52 percent in March.

Pulse Asia noted almost the same percentage of Filipinos who were either optimistic (26 percent) or pessimistic (31 percent) about the national quality of life.

According to the survey, most Filipinos also considered their personal quality of life either to have worsened (43 percent) or remained unchanged (41 percent) in the previous 12 months.

Compared with the September figures, the percentage who viewed a worse personal quality of life rose 8 points; while those who neither observed positive nor negative change declined 6 points.

Fifteen percent said they were in a better situation last month than a year ago, down 3 points from September.

Between September and December, the increase in percentage of losers was highest in the Visayas, up by 22 points (from 38 percent to 60 percent).

The area also recorded the biggest drop in the percentage of those whose quality of life remained unchanged in the previous 12 months, down 16 points (from 45 percent to 29 percent).

Meanwhile, “near to small majorities” in Metro Manila and the rest of Luzon (47 percent and 55 percent, respectively) viewed their quality of life last month as being the same as it was a year ago, while most Filipinos in Mindanao viewed themselves as worse off (48 percent).

Among socioeconomic groups, Class ABC had the biggest increase in the percentage of losers (up 27 percentage points) and biggest decline of those who viewed their personal situation unchanged in the previous 12 months (down 28 points).

Pulse Asia noted almost the same percentages of either losers (42 percent to 44 percent) or those who did not experience any change in their personal situation (34 percent to 42 percent) across all other socioeconomic classes.

Almost half of Filipinos (45 percent) expected no change in their personal quality life in the next 12 months, down 12 points from 57 percent in September.

Optimism was more pronounced than pessimism (37 percent versus 19 percent), but pessimism increased by 8 points from 11 percent.

Those in the Visayas and Mindanao were more optimistic, with 41 percent in both areas expecting to be better off in the coming year.

The gross domestic product, the value of goods produced and services rendered, in the first nine months of 2013 rose 7.4 percent, among the fastest in the region.