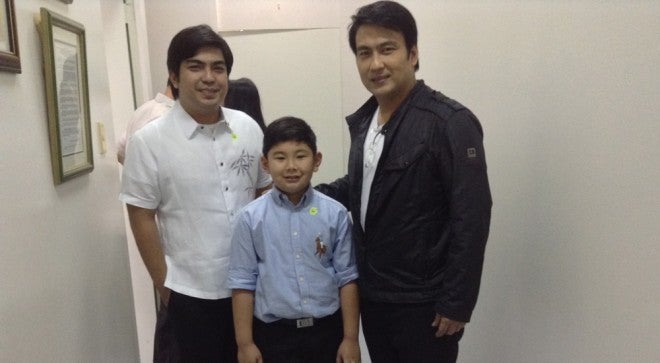 Senator Ramon “Bong” Revilla Jr. poses with his son, Cavite Vice Governor Jolo Revilla, and grandson, who came to the Senate ahead of his scheduled privilege speech this Monday on “pork barrel” funds. Photo courtesy of DWIZ reporter Cely Bueno

MANILA, Philippines —   The family of Senator Ramon “Bong” Revilla Jr. arrived at the Senate on Monday to show their support for the senator, who is scheduled to deliver a speech on the floor in connection with his alleged involvement in the P10-billion “pork barrel” scam.

Among those who came to support the senator ahead of his speech when the session of the Senate resumes at 3:00 p.m. were his wife, Cavite Representative Lani Mercado, their two daughters and three sons, including Cavite Vice Governor Jolo Revilla.

Revilla said his father, former Senator Ramon Revilla Sr., will also go to the Senate to watch and listen to his speech.

The senator said he decided to address the issue only now because he had to thoroughly study the matter, consult other people, and pray.

His speech, Revilla noted, also coincides with the observance of the National Day of Prayer later Monday afternoon.

Besides, Revilla said, he had to submit first his counter affidavit on the plunder case filed against him at the Office of the Ombudsman in connection with the alleged anomalous use of  his Priority  Development Assistance  Fund also known as “pork barrel” funds.