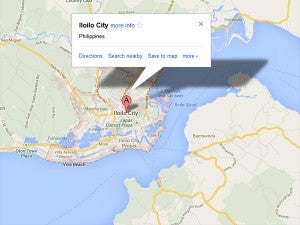 All 29 crew members of the MV Sportivo were rescued, but its cargo of 28,000 bags of fertilizer sank with the vessel, said Commodore Athelo Ybanez, Coast Guard Western Visayas commander.

The crew members were able to deploy life rafts before abandoning the sinking vessel and were later rescued by Coast Guard personnel.

Ybanez said the 663-gross ton vessel was hit by strong waves that dragged its anchor and collided with another anchored vessel MV Jehan at 5:15 a.m. The two vessels were about 700 meters apart.

The middle left side of the MV Sportivo hit the bow of the other vessel and sank about 1,372 meters from the entrance of the Iloilo River. The MV Jehan incurred minor damages.

The cargo vessel, operated by the Cebu-based Seen Sam Shipping, was on its way to Palawan after loading the fertilizer.

The Coast Guard’s marine protection unit is monitoring possible oil spill even after the vessel’s crew told the Coast Guard that they had closed all fuel valves and pipelines before abandoning the ship.

55 rescued as ship sinks in Calapan