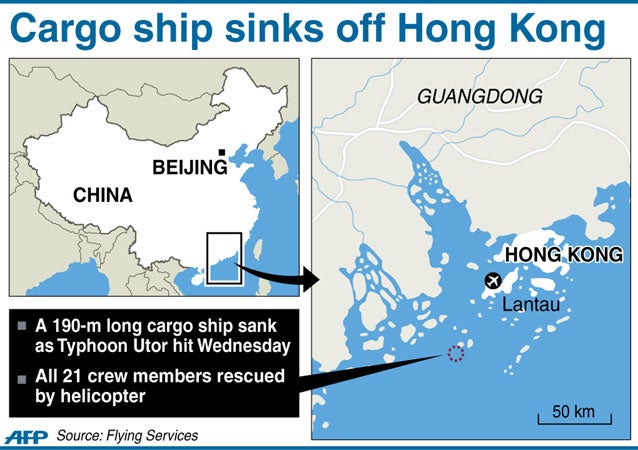 Graphic showing the area where a 190-metre long cargo ship sank off Hong Kong as Typhoon Utor hit the city on Wednesday.

HONG KONG — Helicopter teams helped save all 21 crew from a cargo ship that sank off Hong Kong Wednesday in a powerful typhoon that generated waves of up to 15 meters, officials said.

The crew abandoned the 190-meter-long ship as the bulk carrier Trans Summer tipped on its side and sank 80 kilometers southwest of Hong Kong, Samuel Yip of the city’s Flying Services said.

Yip, a pilot who took part in the rescue operation, said two helicopter teams were dispatched after a call at 10.39am (0239 GMT) and found some crew on life rafts while others were floating in the water.

“The boat had… started to sink so the crew decided to abandon the ship,” he told AFP.

“The air crew saw the ship was leaning to the left side by about 20 to 30 degrees and started to sink when it tilted almost 90 degrees.”

The Hong Kong-registered ship was a bulk cargo vessel travelling from Indonesia to China carrying nickel, he said.

The Flying Services rescued 19 crew, while a vessel from mainland China picked up the remaining two.

Yip said the crew appeared to be mostly mainland Chinese.

Severe Typhoon Utor passed within about 240 kilometers of Hong Kong Wednesday after leaving at least six people dead in the Philippines.

Utor forced the closure of the city’s financial market and schools and disrupted hundreds of flights, but did little other damage.

A Hong Kong-Macau ferry sank during a typhoon leaving 88 people dead in 1971, one of the deadliest maritime accidents in the territory.